Spare a thought for our lexicographers at the moment. They have had to work an enormous amount of overtime lately. Lexicographers are those dear people who fuss about words and their meanings. They are the ones responsible for compiling our dictionaries. Generally they get to work at a leisurely pace and update our dictionaries every decade or so with the addition of those new words which have been adopted into our vocabularies. Of late, this has included such words as, “Google” which was originally added to our dictionaries as the name of a website (a proper noun) and then had to have another entry under it when it became a verb (‘I’ll Google it!”).

But in the last few years, these poor lexicographers have had to work their fingers to the bone trying to keep up. Their overtime hasn’t been devoted to the addition of a few new novel words such as ‘hashtag’ or ‘tweet’, but by overhauling of long-held definitions. Words which have universally been understood and thereby ensured the undemanding workload of lexicographers, have now come to mean something quite different from what they actually mean. This makes the lexicographer’s job very difficult as they flounder to make sense of it all as words now no longer mean what they mean.

Here’s some examples that have now got lexicographers in a tizz.

To this sample list we could add such words as tolerance, and bias. Of course, these are just samples of some of the key words which have been distorted so severely that their recent usage is virtually the exact opposite of their actual meaning. Unfortunately, this propensity for twisting words into novel meanings is not just confined to our street-vocabulary. It is now increasingly occurring in how people understand the Bible.

Pivotal Bible words such as ‘sin’, ‘love’, ‘Jesus’, ‘God’, ‘Scriptures’, and ‘Hell’, have all been twisted beyond recognition from their actual meanings. Sin means to miss the mark of the acceptable standard (Rom. 3:10, 23). Yet, word-twisters would have us believe that it means acting contrary to our true feelings. This is despite the Bible declaring that our feelings are subject to corrupted inclinations which – if left untamed – will result in our harm and ultimate demise (Gen. 4:7; Gal. 5:16).

For I know that nothing good dwells in me, that is, in my flesh. For I have the desire to do what is right, but not the ability to carry it out.
Romans 7:18

The word ‘God‘ has similarly been twisted from its actual meaning – the all-powerful, self-existent, omni-present, omniscient, unchanging, triune, creator of the universe, and final Judge of all mankind; to – a celestial-type being or force whose supreme existence is to ensure my happiness.

It has been said that, “He who defines the words used in a debate has already won the debate!” Words have power. I remember when my father in-law died suddenly. I was devastated. I was asked to take the funeral. I wondered how on earth I could say anything to bring any measure of comfort. I found myself saying, “No words can make any difference” to which I felt the sharp and instantaneous rebuke of the Holy Spirit. “Never say that words can never make a difference! Words can heal. Words can comfort. Words can strengthen!” This is why it is so distressing to me to have to endure the butchering of language at the moment. Too many people are going unchallenged with their word twisting. For example, last Saturday night the ABC 7PM TV News reported that a lesbian Uniting Church minister from Goodwood Road, Adelaide, was displaying a rainbow flag with a “YES” across it. They reported that the minister was receiving much “hate mail” as a result. Of the two examples they presented (which had respondents pointing out that such a position was contrary to Scripture) neither expressed any hate whatsoever. But it seems under the twisted words regime being thrust upon us, their disagreement with the lady in question was deemed to be ‘hatred’. How bizarre.

Little wonder then that the general public who are generally unaware of how language is meant to work has been lured into the trap of accepting that disagreement is hate. The other day, Karen Dickson announced on her Facebook Page that she had just voted “No” in the Same-Sex Marriage Postal survey. One her FB Friends commented on that post that they could no longer be her friend because of Karen’s differing views! How bizarre. 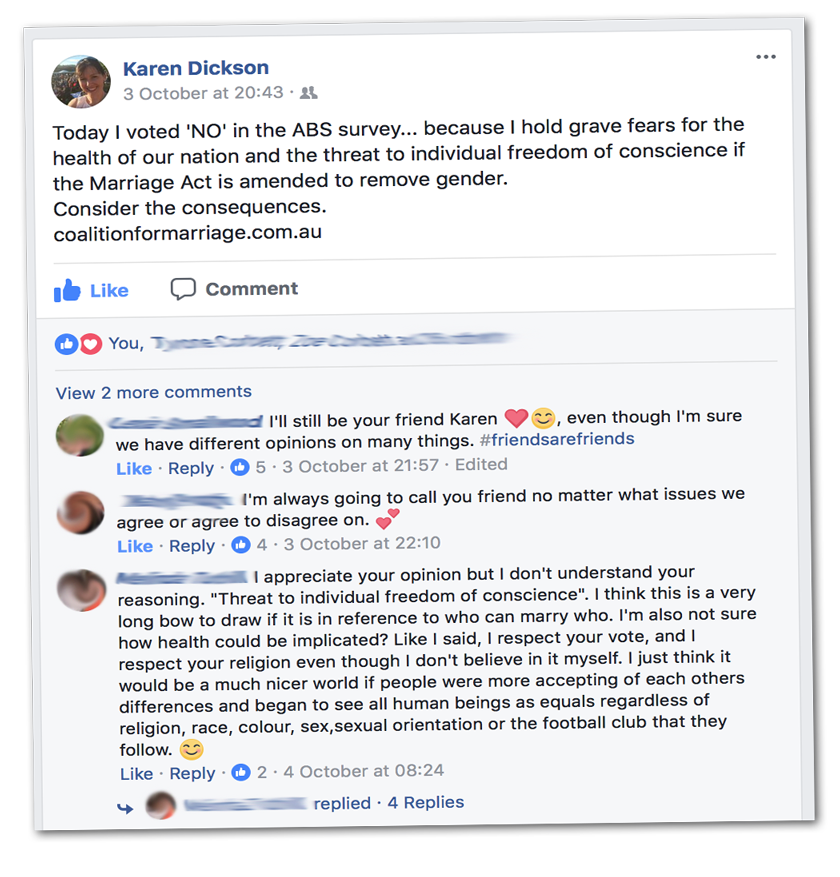 The current practice of word twisting is making any possibility of having a sensible debate virtually impossible. When logic, normally grounded in research and reason, is twisted to mean nice feelings, resulting in the acceptance of the nonsensical slogans such as “Love is love” we are in peril as a society. This is so concerning to those of us who understand that words which once meant something have now been kidnapped and held to ransom by word-twisters because this makes the unsuspecting general public susceptible to being willingly persuaded that black is white and night is day. Quite frankly, it’s enough to send any lexicographer around the twist!

I conclude with a comment from James Parker who knows a thing or two about words and their power: