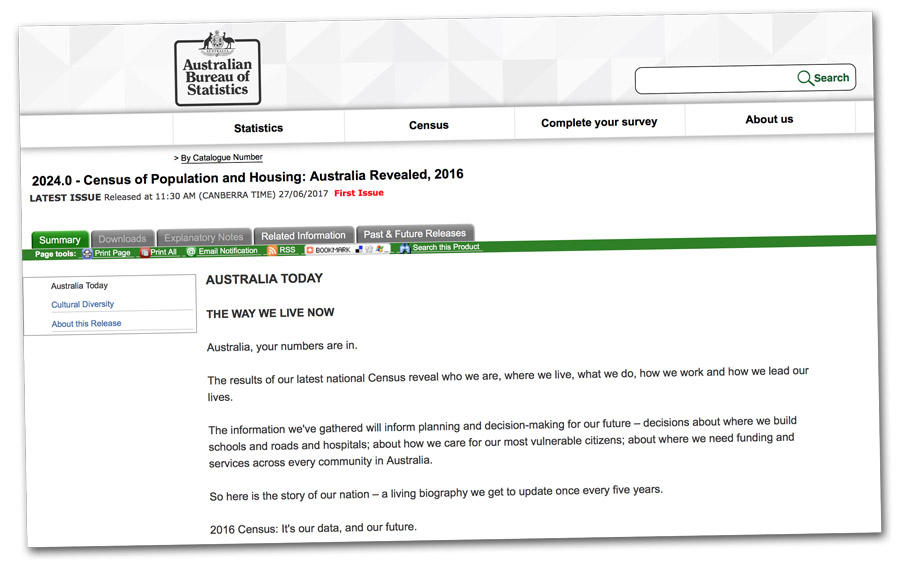 A Different Take On The ABS’s Numbers

The Australian Bureau of Statistics released the latest Census results this week. It’s interesting how these results were presented by the mainstream media. There were reports of Christianity’s decline; the dramatic rise in the number of people selecting  “No Religion”; and the radical reformation of what now constitutes “a family” – with an 81% increase in those families constituted as being a “same-sex couple family”. Numbers, particularly statistics, can be difficult things to understand, especially when presented as percentages. Here’s a different analysis of the data from what you heard reported in the mainstream media…

The one who states his case first seems right,
until the other comes and examines him.
Proverbs 18:17

The ABS’s Decline of Christianity

The ABS Census collects a relatively wide range of data. Yet, when the media reported on the findings of the ABS, it seemed that they took delight in highlighting a decline in the number of people professing to be Christians, and a rise in both the number of irreligious people and same-sex couples. This is despite the fact that the Census revealed that 52% of Australians identify themselves as Christians. That is remarkable! It is twice remarkable when you consider the aggressive campaign waged to have as many Australians as possible select the “No religion” box. Thirty percent of Australians did. But 60% of Australians indicated that they are religious. That’s 14.64 million Aussies! And, of these, 12.2 million are Christians! It’s also worth considering that of the 30% of Australians (7.32 million Aussies), the Census had presented them with various Christian “denominations” as religions. (Many Christians object to be classified as religious, and nearly all would object to having their denominational affiliation identified as a distinct religion.) 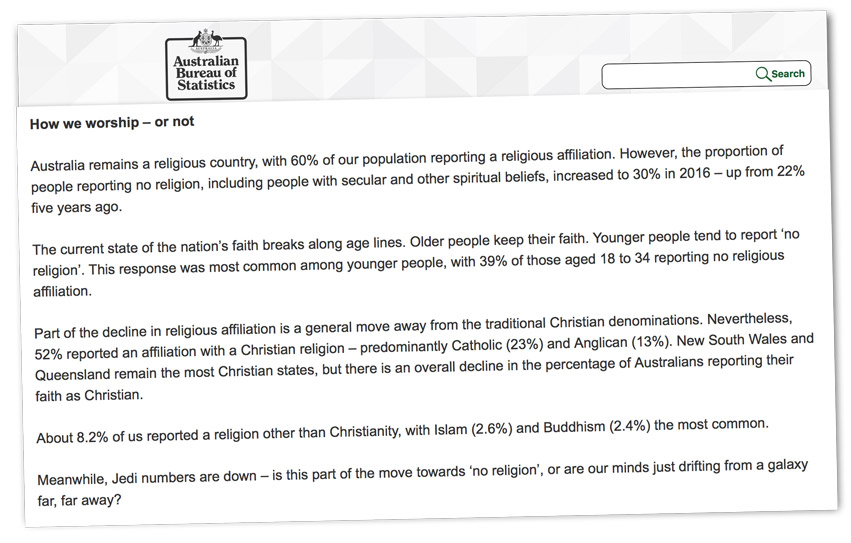 The ABS hints at this with their statement, “Part of the decline in religious affiliation is a general move away from the traditional Christian denominations.” I wonder whether the Census figures would have been quite different if the options given in the Census simply listed “Christian” without giving the major denominations as religious choices? “Nevertheless” reports the ABS, 52% of Australians identify themselves as Christians! Nevertheless indeed. It is not a figure to be lightly dismissed with the wave of a politician’s hand with the comment, “Christians are now irrelevant!” Such politicians should take care not to awaken the Sleeping Giant they mock. However, we Christian leaders have our work cut out for us as we seek to re-engage with a generation that deeply craves spirituality but despises crass formalism.

¶ But understand this, that in the last days there will come times of difficulty… having the appearance of godliness, but denying its power. Avoid such people.
Second Timothy 3:1, 5

The ABS’s Rise of No-Religion

I am actually thrilled that so many people have identified themselves as having “No religion”. This makes the Church’s task of evangelism so much greater – and, so much easier! One of the greatest obstacles to leading an Aussie to Christ has been the misinformed belief that if you are born in a Christian country, you are a Christian. Quite possibly, the ABS has now done the Church a tremendous favour by helping to distinguish fair-dinkum Christians from not-even-nominal-Christians (which is not Christian at all). We may find that the traditional resistance to the Christian message of God’s love and offer of forgiveness will increasingly be met with a less resistance. Rather than bemoaning the rise of the Aussies with “No religion”, we should explain more clearly, and demonstrate more boldly, what authentic Christianity actually is.

Religion that is pure and undefiled before God the Father is this: to visit orphans and widows in their affliction, and to keep oneself unstained from the world.
James 1:27

The ABS’s ‘Evolution’ Of The Family

The ABS’s reporting of an 82% increase over the past five years in the number of same-sex couples in Australia, sounds dramatic. But it sounds far less dramatic when we look at the actual numbers. 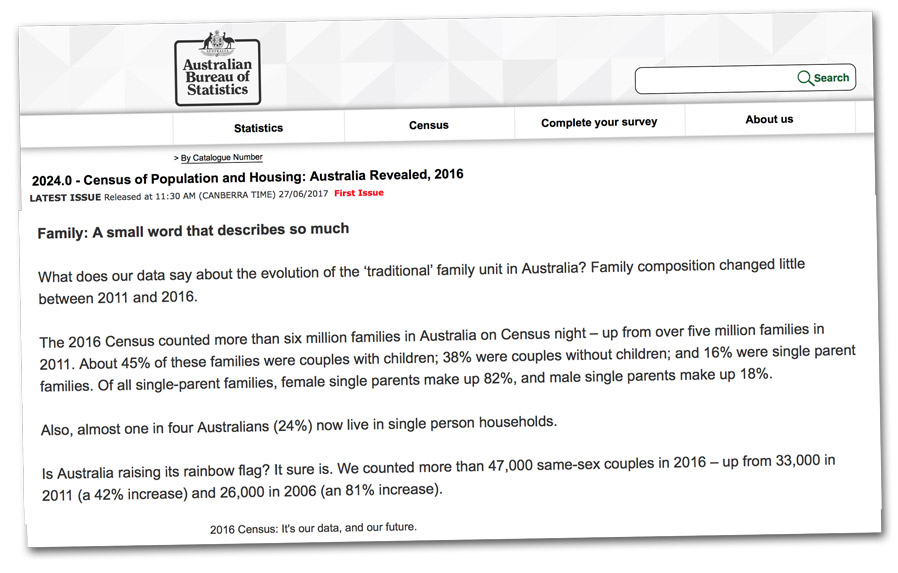 He answered, “Have you not read that he who created them from the beginning made them male and female, and said, ‘Therefore a man shall leave his father and his mother and hold fast to his wife, and the two shall become one flesh’? So they are no longer two but one flesh. What therefore God has joined together, let not man separate.”
JESUS OF NAZARETH, Matthew 19:4-6

The Future Of Christianity In Australia

Sadly, there are many struggling churches across Australia. But there many churches that are growing and thriving. Too many Christian leaders have succumbed to an extremely poor theology about the Church and Eschatology. Consequently they have interpreted certain social trends as inevitable and even prophesied in Scripture. There is, however, a far richer, far more Biblical, view of the Church and Eschatology that regards Christ as sovereign over the universe and that the Church is his means of revealing Him through the proclamation of His Word. As Professor Abraham Kuyper rightly declared, ‘There is not a square inch in the whole domain of our human existence over which Christ, who is Sovereign over all, does not cry, Mine !’

¶ After this I looked, and behold, a great multitude that no one could number, from every nation, from all tribes and peoples and languages, standing before the throne and before the Lamb, clothed in white robes, with palm branches in their hands, and crying out with a loud voice, “Salvation belongs to our God who sits on the throne, and to the Lamb!”
Revelation 7:9