I am mused, rather than amused, by movies. Recently I was mused by the Hollywood blockbuster, Passengers. Initially it appears to be a Sci-Fi movie. But in reality it an exposition of what it means to be human. It opens with the space-ship Avalon hurtling through space with 5,000 passengers and 258 crew leaving earth to colonise an earth-like planet, Homestead II. These passengers are looking for a fresh start. The voyage on the Avalon is calculated to take around 120 years. In order to survive the journey, the passengers and crew undergo induced hibernation in special pods. But thirty years into the journey the unforeseen happens. 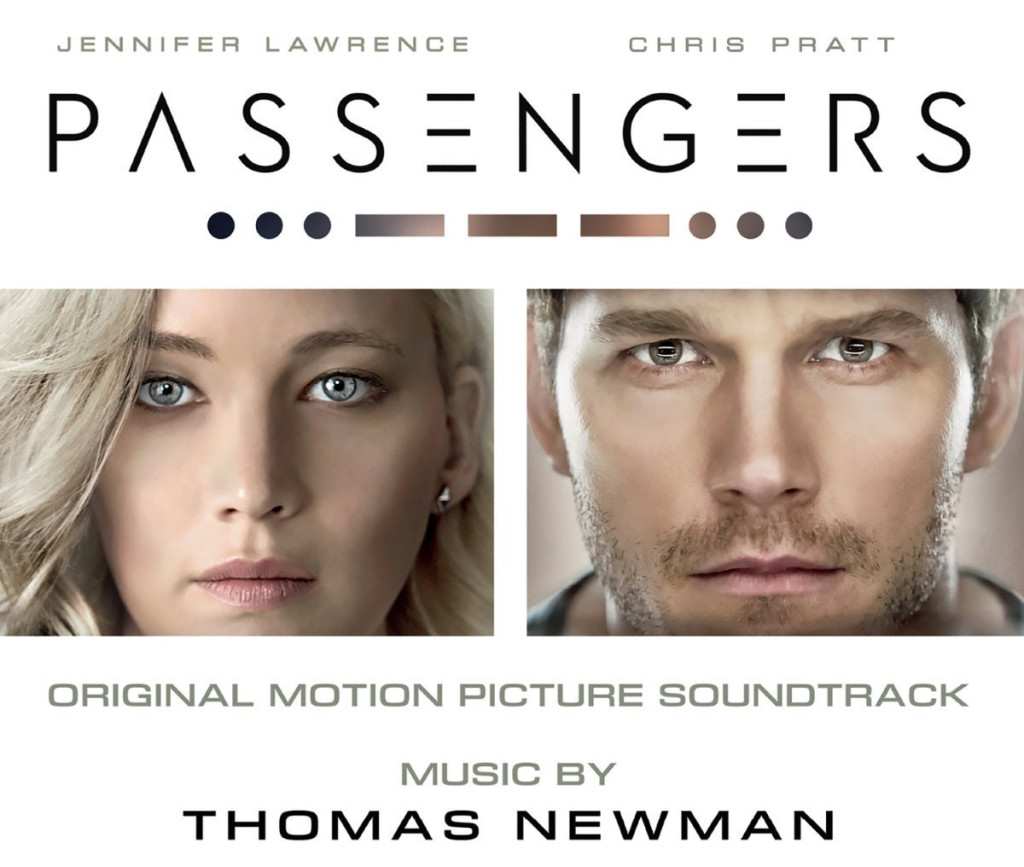 The flight-path of the Avalon has been calculated allowing for where meteor showers are to be expected. Its journey to the outer reaches of the galaxy has been designed to be able to withstand all meteor showers. But, what was not factored on was an asteroid collision which is later revealed to be catastrophic – but for most of the movie we do not know this. Inexplicably, one of the passengers, Jim Preston, is awoken from his hibernation. Jim, we soon learn, has a knack for figuring out how complex, computerised, machinery works. We learn that Jim is a mechanic. He seeks to find out why – out of all the 5,000 souls aboard – he is the only one who is awoken from hibernation. But there is no apparent reason why. It seems he has been chosen.

Therefore I endure everything for the sake of the elect, that they also may obtain the salvation that is in Christ Jesus with eternal glory.
Second Timothy 2:10 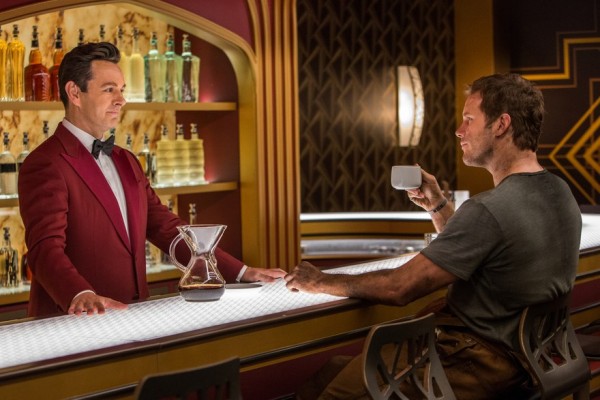 Jim has all that the space-ship has to offer at his disposal. Unlimited alcohol. Unlimited food. Unlimited indoor recreation. Unlimited entertainment. But something is desperately missing. With ninety years still to go, he realises he will die before reaching flight’s end. After a year of no interaction with anyone except an android bartender, by the name of Arthur, who has been programmed with a degree of artificial intelligence, his loneliness gets the better of him and he can take it no longer.

Love one another with brotherly affection. Outdo one another in showing honor.
Romans 12:10

He wanders the hibernation deck to look at all the sleeping people and is drawn to the hibernation pod of a beautiful young lady. She fascinates him. He searches through the passenger records to learn more about this young lady. As he watches the application videos of Aurora Lane explaining why she wanted to travel to Homestead II, he experiences a strange stirring in his heart. The more he looked through her archives, the closer he felt that he had known her all his life. He became convinced that she was his perfect match. Jim discovered how to awaken her from her hibernation. But he assures himself, and Arthur, that he would never actually do such a thing – because that would be wrong.

For I know that nothing good dwells in me, that is, in my flesh. For I have the desire to do what is right, but not the ability to carry it out. For I do not do the good I want, but the evil I do not want is what I keep on doing.
Romans 7:18-19 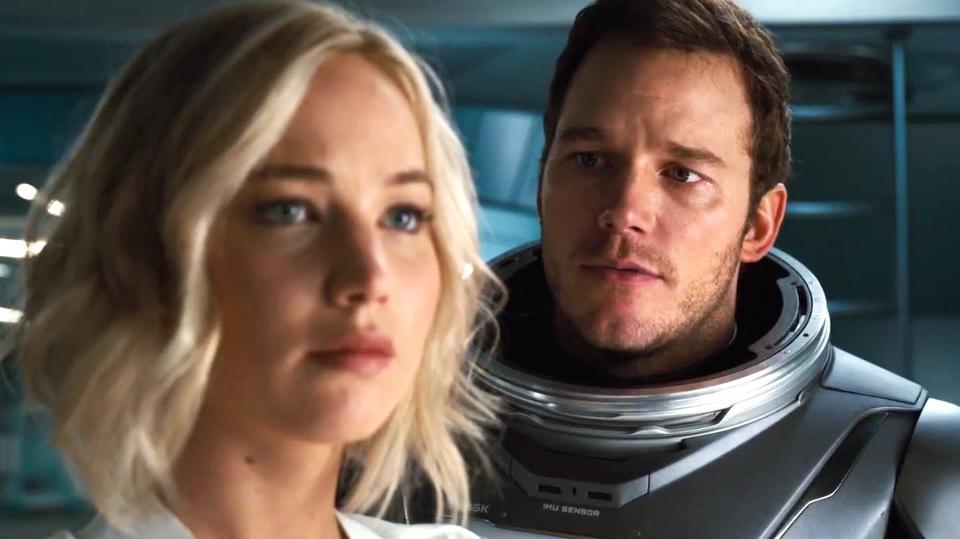 At this point, Jim Preston has gone a year without any human contact. He is teetering on insanity and comes within a whisker of taking his own life. After all, God has not designed for anyone to live isolated from others.

¶ Then the LORD God said, “It is not good that the man should be alone; I will make him a helper fit for him.”
Genesis 2:18

Even in the distant corners of the galaxy the human soul is still subject to its conscience and the conviction of sin. Jim Preston had become a conflicted man. It is then, after subsequent months of internally battling with the morality of waking Aurora from her hibernation, that he does what he said he would never do. The awakened Aurora is told by Jim that the Avalon is glitching. This is why, he tells her, that only their hibernation pods have malfunctioned. Their time together exploring the Avalon brings them closer together. Jim was indeed right. They were indeed a perfect-match. But the Avalon seems to be breaking down. Things are no longer working quite right. Then another hibernation pod malfunctions, this time in the crew section, when the Chief Deck Officer, Gus, is awakened.

By this time, Arthur the bartender has let slip that Jim intentionally awoke Aurora from her hibernation and she is furious! She tells Gus that what Jim has done is essentially to “murder” her. Gus somewhat mediates between them and attempts to discover why the Avalon is breaking down. But Gus is not well. He goes to the crew’s medical repair pod and discovers that he has major, irreparable internal organ failure. The repair pod is unable to repair his damage. In a short while Gus is dead. Before he dies he has left Jim and Aurora with his crew access tag.

What we discover toward the end of the movie is that space-ship is also dying. Jim and Aurora discover that the Avalon has suffered catastrophic asteroid damage which has devastated the ship’s nuclear reactor which has burnt out one of Avalon’s main computer processors. Jim devises a strategy to repair the ship. But it is extremely risky and has a low chance of his own survival. Aurora begins to realise that Jim is actually quite a noble guy for being to do this. She also realises that what she thought was grossly unfair, and akin to “murder”, was actually the very thing that has given her any chance of survival – and ultimately the survival of the lives of all 5000 passengers and the 257 surviving crew members.

HOW PASSENGERS REVEALS THE TRUTH OF THE GOSPEL

And we know that for those who love God all things work together for good, for those who are called according to his purpose.
Romans 8:28

Passengers shows that human beings cannot live in isolation. We are created to live in community – especially small communities such as families. We are also created to love. But ultimately, the subtle message behind the movie, Passengers, is that God is the unseen Guide and Conductor of every atom in the Universe. As such, everyone who watches Passengers should leave the movie theatre with a heart full of worship for our Sovereign and Creator.

And he said with a loud voice, “Fear God and give Him glory, because the hour of His judgment has come, and worship Him who made heaven and earth, the sea and the springs of water.”
Revelation 14:7

Of course, we are all actually hurtling through space on a ship called earth. We are all passengers. In some respects, our ship is broken. Just as the Avalon experienced the invisible hand of the Sovereign God, so too our earth is riddled with the tell-tale signs of God’s redemptive intervention. And God invites all people everywhere to experience for themselves His intervention in their lives if they would just ask. You are not a million miles from God – you are just one prayer away!