Launching Out Into The Deep

One of the stipulated conditions for being allowed to marry Kim, as I was to later discover, was that I had to learn how to sail. So serious was this stipulation, that my father-inlaw paid for me to do a sailing course at the Royal Melbourne Yacht Club. Upon completion of the course, I was duly entrusted with the family yacht. Fortunately, we lived right near Williamstown, Melbourne, which meant that mooring and regularly sailing the yacht was relatively practicable. But, alas, my entire sailing experience was confined to Port Phillip Bay. Other experienced sailors would talk with excitement about “sailing green” (through rough ocean) and negotiating ten to fifteen metre waves! I was content to limit my sailing to a very light shade of blue!  I do, however, have the utmost respect for sailors who venture out into the untamed green waters of the world and return as conquerors. But not all do. Going out into the deep has its rewards, but it also has its risks.

And when he had finished speaking, he said to Simon, “Put out into the deep and let down your nets for a catch.”
Luke 5:4

“Launching out into the deep” in life involves combatting weariness, overcoming past failures, dealing with unresolved hurts, and trying to forget some possible bad memories. It can be done – but needs some mighty awkward hurdles to be negotiated first! When Jesus told Peter to launch out into the deep after he and his co-workers had toiled all night and caught nothing, Peter also had to get over his previous negative experiences.

And Simon answered, “Master, we toiled all night and took nothing! But at your word I will let down the nets.”
Luke 5:5 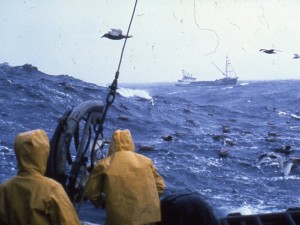 Sailing vessels are always safe when secured in a harbour. But sailing vessels were never intended to remain within the safety of a harbour. Your life is like a ship and your journey through life is like navigating seas and oceans. Certain fishing boats, such as the Crab fishermen of the Bering Strait, up near Alaska, have to venture way out into some of the roughest seas on the planet. This Crab season only lasts a few weeks. Each season, several of these fishermen die. For those Crab fishermen who survive and make it back at the end of the season, the financial rewards are significant. They can earn up to a year’s wages in just a few weeks. 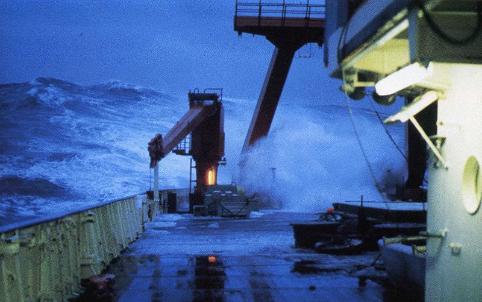 Fishing on the Bering Sea is one of the most hazardous professions on the planet. Days spent lugging around heavy equipment amid giant swells and icy blasts of sea-soaked air — it’s not for the faint of heart. The isolation of those remote waters, the winter months shrouded in darkness and prone to stormy skies, the high winds and ice-covered decks — all stack the deck for hypothermia, drowning and other life-threatening accidents. Despite the danger, there’s still a good bit of money to be made as a fisherman on the Bering Sea — provided you’re willing to pay your dues and work your way up.
Discovery Channel

Millions of dollars are made by these Crab fishers in just one season. But it is only possible if they launch out into the deep.

And when they had done this, they enclosed a large number of fish, and their nets were breaking.
Luke 5:6

Spiritually the same principle seems to apply. The more we are prepared to step out of our comfort zone, obey Christ, and venture deep, the greater the reward. In just over a week, we as a church will be doing just this. Many of us have been planning, building, organising, training, investing, into this Journey campaign. One of our KiDS Church workers has spent the last three weeks building the material which will resemble the inside of a jumbo jet. This has also involved painting and shaping the various boxes now dressed up as pieces of luggage, for the luggage of life game the children will be playing. All of this effort for what will effectively be for less than sixty minutes of usage. Then it will be taken down and disposed of forever. This is launching deep. It is in this deep where we hope to catch the kind of young fish that Jesus spoke about.

And Jesus said to them, “Follow me, and I will make you become fishers of men.”
Mark 1:17

This kind of deep fishing involves leg-work and knee-work. Some of us can do the leg-work, some of can do the knee-work. When a church launches out into the deep there is always a lot of leg-work to be done (advertising, catering, volunteer-coordination, multi-media presentations to produce, VIPs to be invited, décor to be updated, music to be learned/practised/rehearsed, leaflets to be delivered, sets to be made, curriculums to be written, social-media to be updated, and so on), and there is an even greater amount of knee-work to be done (prayer for appropriate weather, prayer for visitors to turn up and for God to open their hearts, prayer for the volunteers to be refreshed and ready, prayer for the musicians and singers to be prepared and able to perform with confidence, prayer for the children invited to join in, prayer for the children’s workers to well-preprared and able to hold the attention of the assembled children, prayer for our sound-team and media team to work in harmony, prayer for those involved in the catering to be well organised and in good health, and prayer for the preacher to have God’s anointing).

Some of us may feel like we’ve already toiled all night and caught nothing. Even the thought of launching out into the deep is frightening. But in order for us to reach the precious catch which Christ summons us to fish for, we have to set sail and head for deep waters. On Sunday February 19th at Legana, you may feel as if you are out of your depth, but as these Bering Strait Crab-fishermen constantly remind themselves, it’s only for a season and the rewards are extraordinary. But as any of these Crab fishermen will tell you, it’s not a one man job – we all need to help each other out. If you can’t do some of the leg-work which needs doing, then we need you on your knees helping out with the knee-work. On Sunday February 19th, let’s all give 100% and truly make it a One Hundred Percent Sunday.