The Spiritual Biology Of A Prophet

¶ Then he said to them, “These are my words that I spoke to you while I was still with you, that everything written about me in the Law of Moses and the Prophets and the Psalms must be fulfilled.”
Luke 24:44

The thirty-nine books of the Old Testament are generally categorised into History, Law, Poetry and Prophets. This is the genius of God. He has chosen to communicate His Word to all mankind through a story with sub-stories, art, decrees, narratives, and biographies. He has also chosen to do so largely through prophets. Some of these people were formerly princes, or shepherds, or farmers, or priests. Some of them were so odd they struck fear into entire towns and villages whenever they entered. Others were so ordinary they were laughed to scorn when they dared prophesy to Kings of nations. There was something peculiar about these instruments of God and we are now going to dissect one of them to see what was going on.

So Samuel called upon the LORD, and the LORD sent thunder and rain that day, and all the people greatly feared the LORD and Samuel.
First Samuel 12:18

¶ Then Amos answered and said to Amaziah, “I was no prophet, nor a prophet’s son, but I was a herdsman and a dresser of sycamore figs. But the LORD took me from following the flock, and the LORD said to me, ‘Go, prophesy to my people Israel.’
Amos 7:14-15 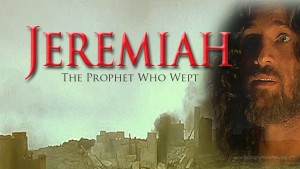 For those of you who have been tracking with me through our Jeremiah series, I have attempted to show that Jeremiah was not cold-hearted, boney-finger pointing, party-pooper, but a deeply compassionate, caring, and sensitive young man who was given a job by God which he didn’t want. He became known as the prophet who wept. Through the series we have seen how he grew into a prophetic statesman who wanted God’s people to return to God instead of rebelling against God. Yet, no matter how well meaning a prophet was, people still recoiled at the prophet’s message.

¶ “For my people are foolish;
they know me not;
they are stupid children;
they have no understanding.
They are ‘wise’—in doing evil!
But how to do good they know not.”
JEREMIAH 4:22

This week I had an interesting coffee with someone who died. Let me explain. Several months ago he experienced intolerable pain and was taken to hospital in the dead of night. As he got to Emergency Department, he passed out. The medical staff realised that he hadn’t just fainted, he had had a cardiac arrest. Despite their best efforts, the E.C.G. showed a flat-line for the twenty minutes they worked on him. Then an African doctor came into the room and took the dead man’s right foot. In less than a minute a feint pulse suddenly appeared on the ECG screen and the cardiologist ordered that he be taken immediately to ICU to be put on their specialised equipment. In all, doctors say that he was clinically dead for forty-five minutes before he was revived. During this time, and the subsequent recovery time afterwards, he met with the Lord in a way that he struggled to explain to me. “It was more real than you are across this table from me now” he said. “The Lord spoke to me,” he went on, “but not with words.” “I heard Him, but not in the same way I am hearing you now.”

Prophets learned to use their spiritual ears. When Jesus said, “let him hear” it might sound like He was asking for permission on that person’s behalf, but the beauty of the Greek language, in which the New Testament is written, is that each verb tells us far more than can be translated into English. ἀκουέτω (akou-ettoe) is the Greek verb translated let him hear. It is what translators refer to as an imperative  – a command, in the sense of a parent saying to one of their two squabbling children – Let him go!  This is why more modern translations put an exclamation mark into the translation, such as the New English Translation (NET Bible)-

The one who has ears had better listen!
JESUS, Matthew 11:15

When God called Moses to be a Prophet and the Deliverer of Israel out of Egypt, He used a burning bush to get his attention. Moses saw something odd. Prophets tend to see things differently to most of us.

(Formerly in Israel, when a man went to inquire of God, he said, “Come, let us go to the seer,” for today’s “prophet” was formerly called a seer.)
First Samuel 9:9

¶  Oh that my head were waters, and my eyes a fountain of tears, that I might weep day and night for the slain of the daughter of my people!
Jeremiah 9:1

How easy it is for us to look at people but never actually see them? God opened the eyes of the prophets to see what they were already looking at and then to begin to see with their spiritual eyes. The prophets themselves foretold of the coming New Covenant when this would become increasingly common when the Holy Spirit was poured out onto believers.

The heart of a prophet was full of love for God. In First John we are told that it is simply impossible to love God without loving people. The prophet who closes our Old Testament, Malachi, sounds like he is angry and perhaps cold-hearted. But nothing could be further from the truth. Angry? Yes. When a heart is full of love it is more prone to anger – because that heart’s expectations of the ones they love are higher. Malachi was angry that the people had neglected God and His House (Mal. 1). Malachi was angry that the people of God had compromised marriage (a picture of our relationship with God for the world to observe, Mal. 2). Malachi was angry that the people had begun to treat their religion as routine and worthy of their left-over time/talent/treasure, and as such, he charged with robbing from God because He deserved their first, their best, not their spare-change (Mal. 3). And Malachi was angry because fathers no longer cared enough for their children to ensure that they were taught the ways of God, and as such, the land was now full of fatherless delinquents who carried out violence in the streets (Mal. 4). But Malachi’s anger was caused by his heart being full of love for God and people. He cared. Just as a parent who cares for their child and thus does all they can to guide them, correct them, and discipline them, so Malachi sought to guide, correct, and even bring a disciplining rebuke to those who had grown complacent, routinised, and half-hearted in their devotion to God.

Christ has called His Church, you and me, to a prophetic voice to our generation. In this light, we each and all would do well to develop the ears, eyes and heart of a prophet by drawing nearer to God with open ears, open eyes, and an open heart. Time prevents me from exploring the other body parts of a prophet, but I do hope that as come together as the Church we will be an increasingly complete prophetic body to a world that seems to be becoming increasingly delinquent and violent just as it was in Malachi’s day.

But for you who fear my name, the sun of righteousness shall rise with healing in its wings. You shall go out leaping like calves from the stall.
Malachi 4:2