HAVE WE LOST OUR SENSE OF THE SACRED?

In the West, unlike the East, we suffer the enormous disadvantage of living in a culture largely unfamiliar with the sacred. Added to this, there has arisen an understanding among contemporary Christians that there is no warrant for making any distinction between ‘the holy’ and ‘secular’. But rather than regarding everything as holy it has tended to mean that everything which was once holy is now regarded as ordinary (‘secular’). This then leads to certain sacred rituals of Christianity being trifled with (treated as less important than they are).  When this happens, the Christ-instituted rituals of Christianity are misrepresented and therefore misunderstood, which in turn, diminishes people’s vision of God’s glory. Let’s rethink rituals.

RITUALS OR SACRAMENTS OR ORDINANCES?

Rituals can be lifeless. Especially when they are not understood. All of the rituals of Christianity are opulently rich in meaning. Some traditions of the Church refer to these rituals as sacraments. The word ‘sacrament’ comes from the Latin word for mystery, “sacer”. It has generally come to mean the outward expression of an inner grace. That is, by performing the ritual, God’s grace is mediated to its participants. The traditions of the Church which have regarded certain Christian rituals as sacraments have necessarily required that those who minister them are consecrated to do so. These people are known as priests. The belief that some people can be consecrated as priests and then minister the sacraments is known as sacerdotalism. 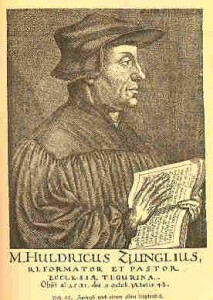 It was the Swiss Reformer, Ulrich Zwingli, who first challenged the notion of Communion (“the Eucharist“) as a sacrament. He argued that it was not a sacrament because the elements were merely representations of the Lord’s body and blood. This was different to the Roman Catholic position which taught that the elements (which they call accidents) are mystically transformed into the actual body and blood of Christ. This view is known as Transubstantiation. It also disagreed with Martin Luther’s modified position about Communion. Luther also disagreed with the Roman Catholic position but taught that Christ was with the elements of Communion. This Lutheran view is known as Consubstantiation. John Calvin disagreed with Zwingli and argued that the Communion elements were more than mere representation of Christ’s body and blood, but he too disagreed with the Roman Catholic and views. He coined the expression Ordinance and taught that the Communion should only be administered by an authorised  (‘ordained’) minister.

Many Protestants now hold to a Neo-Zwinglian view of Communion. They regard the elements of Communion as typifying the body and blood of Christ but having deep significance for all who partake. While not considering it to be a ‘Sacrament’ (which in itself imparts some grace to the participant) they do consider it to be mysterious. They argue that the emblems (or “elements”) of the Holy Communion were consecrated by Christ. The act of sharing and then consuming these elements was also consecrated by Christ. The  significance of both the nature of the elements (unleavened bread typifying the sinless body of Christ, and the unfermented wine typifying the uncorrupted life of Christ) and how they are shared and consumed (the pieces of bread being broken from one unleavened loaf typifying that the participants are one in Christ, and the wine coming from one source typifying that there is only one Saviour). The mystery of this rite (or, ritual) is that if it is done in an unappreciative manner, there can be grave consequences (note the Apostle’s reminder to the Corinthians about this in First Corinthians 11). The celebration of Holy Communion is therefore a sacred moment.

¶ Now I commend you because you remember me in everything and maintain the traditions even as I delivered them to you.
First Corinthians 11:2

The word ‘sacred’ means set apart from the ordinary. It is distinct from ‘secular’ which means ordinary, common (even though most understand ‘secular’ to mean irreligious or non-religious). In this sense, Holy Communion is sacred. Its occasion, its elements, its means of sharing together, and what it typifies, are not to be trifled with. Dr. Sproul’s rebuke to his young theological student was therefore not the rankings of some out-of-touch theological dinosaur. The mystery 0f Holy Communion transcends time and culture. When Jesus said, “take eat” He was intersecting the present. When He said “in remembrance of Me” He was intersecting the past. Then when He said, “until I come”, He was intersecting the future. Thus, the practice of Holy Communion has past, present, and future implications. It speaks of what the Lord Jesus has done (by saving us), is doing among us (by knitting us together into a body of believers who experience supernatural unity in Christ with our fellow brothers and sisters, which requires “discerning” each time we partake, refer to 1Cor. 11:27) and will do when we all experience the fullness of our salvation in the eternal state which the Book of Revelation described as a glorious ‘supper’ together in Heaven. This is why it is extremely inappropriate for non-believers or non-covenantal-believers (those who believe in Christ and the Gospel, but have not sealed their covenantal relationship with Christ through the waters of believers’ baptism). This is why none of my children were permitted to partake in Holy Communion until they had entered into the covenantal waters of baptism. It’s also the reason we take Holy Communion out of our monthly Guest Service.

¶ For I received from the Lord what I also delivered to you, that the Lord Jesus on the night when he was betrayed took bread, and when he had given thanks, he broke it, and said, “This is my body, which is for you. Do this in remembrance of me.” In the same way also he took the cup, after supper, saying, “This cup is the new covenant in my blood. Do this, as often as you drink it, in remembrance of me.” For as often as you eat this bread and drink the cup, you proclaim the Lord’s death until he comes.
First Corinthians 11:23-26

Water Baptism or Holy Communion does not save its participants from eternal damnation. But both of them typify aspects of the work of Christ with great precision. This is why neither should be trivialized or trifled with. Time prevents me from elaborating on the third of ordinances, Holy Matrimony, and discussing its rich typifying of what it means to follow Christ and become one with Him.  But if more believers did understand this, they might appreciate why the Enemy is so keen to undermine it in the eyes of the world.