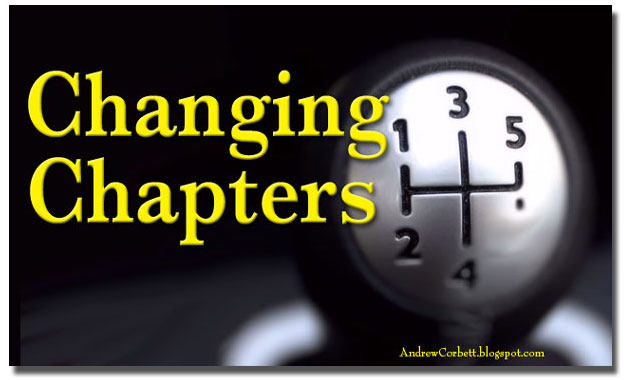 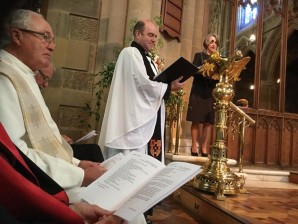 The Governor of Tasmania, The Hon. Prof. Kate Warner, participating in the Opening of the Legal Year in St. David’s Cathedral

Today I participated in yet another Opening of the Legal Year ceremony in St. David’s Cathedral, Hobart. The Chief Justice of Tasmania, each of Tasmania’s judges, magistrates, barristers, the Head of UTas Law School, graduating law students, police, various members of the Parliament, and the Governor of Tasmania, present themselves. In addition to this honour role of eminents are various church leaders providing their prayerful participation, which is why I was present. This annual event marks the beginning of the Legal Year in our State but in many respects it marks the beginning of the church year as well. It is thus both a time to reflect back and gaze ahead.

Justice, and only justice, you shall follow, that you may live and inherit the land that the LORD your God is giving you.
Deuteronomy 16:20

This year will mark my twenty-third year in the privileged position as pastor of Legana. There has been a lot of prayer and work sown into the church and community over these years. In many respects we are now seeing answers to many of these prayers. People are joining our church. People are coming to Christ. Those redeemed are professing their faith in Christ through the waters of baptism. People have given wonderfully to make our new facilities a reality. As I reflect upon these things, I am full of thanks to God.

This year will mark a significant new chapter in our church. F.W. Boreham said that a pastor can never reach the peak of his effectiveness until there are those in his congregation who have never known any other pastor and cannot conceive of there ever being another. Perhaps, about now, this is true for some at Legana. Perhaps this is why there is a strong sense of synergy now between pastor and people in our church. During my recent incapacitation, I was touched by how many in our church expressed their prayers and sympathy about my difficulties. As I explained the other Sunday, perhaps this has something to do with the Lord answering my years of praying for my role as pastor that I might have greater compassion for people. The new chapter we are entering is exciting for several reasons.

To Him the gatekeeper opens. The sheep hear his voice, and he calls his own sheep by name and leads them out.
John 10:3

Any church stands or falls on its leadership. Any shortcomings our church has had over the years, and there have been many, can be attributable to my lack of leadership capacity. But this year we are adding capacity to our church through our restructure and new staff appointments (we’ll talk more about this on Vision2020 Sunday). As we heard back in January from Bob McKay, a church transition consultant, if we keep doing things the way we have been doing them, we will only ever be a good church. Many churches are content to be good. But there are some churches that God calls to be more. 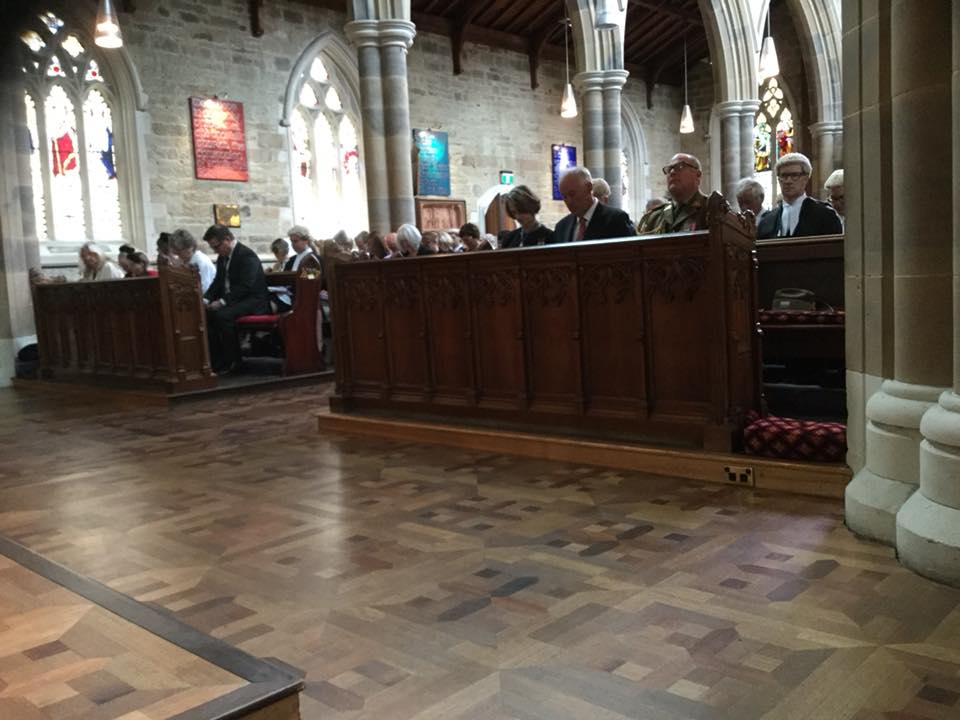 I understand why some churches are content to remain good. There is some pain associated with the needed changes to grow in depth and effectiveness. It means leaders have to uncomfortably grow. It means that the level of service has to grow. It means more sacrifice. It means more confronting issues rather than avoiding them. It means that we have to let go of certain things and cheer others on as they pick them. And as we heard from Bob that January night, the one who will bear the most pain will be me because it will involve me being ‘uncorked’ in so many different ways so that I cannot be a bottleneck to what God wants to do. This will be painful and difficult for me – but this is what it means to follow a crucified Saviour. 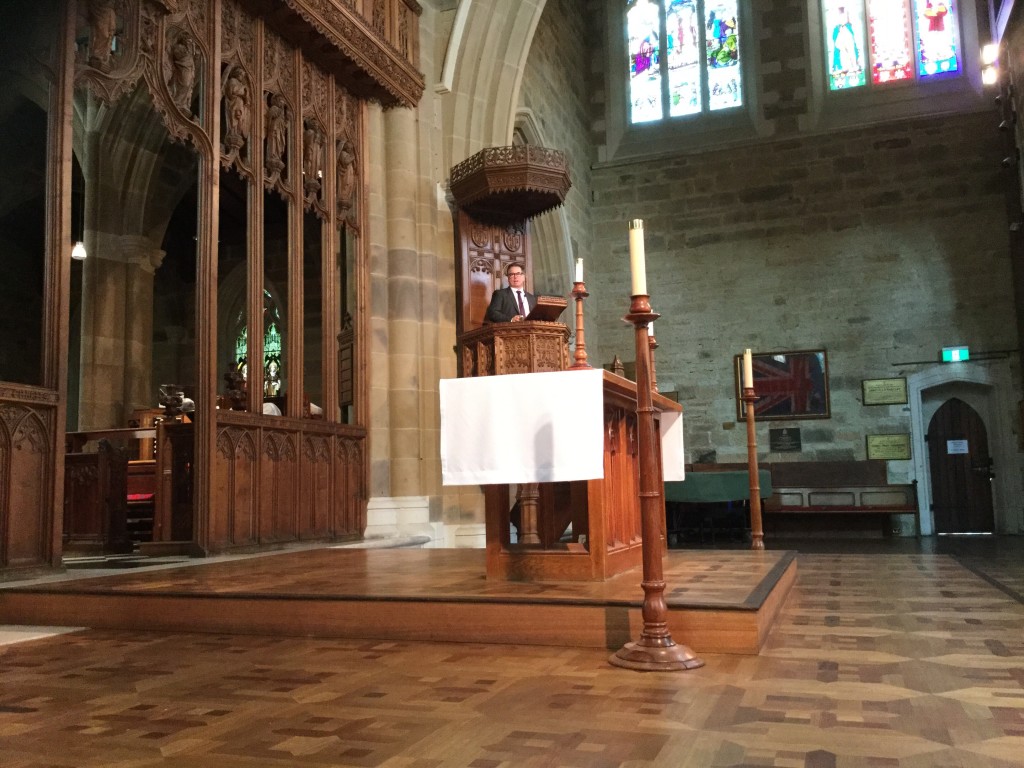 Dr. John Dickson speaking at the 2018 Opening of The Legal Year.

It was my privilege to be asked to pray for our State to be more compassionate. This included praying for the poor, the homeless, the refugee, the imprisoned, the orphaned, and the broken. Our new chapter is already taking shape in a way that is enabling us to be more compassionate to those often not shown any. As I prayed this prayer today in front of the Chief Justice, the Governor, members of Parliament, and those in the legal profession, I reflect that many of these people are at the wrong end of what it takes to build a compassionate society and that the local church is at the front end. Yet, we need both ends of the compassion spectrum covered. Dr. John Dickson gave an excellent case for why this should be so in his address to those present. He showed that just prior to the Christ coming it was accepted by culture that not all people are equal. Women were worth less than men. In Roman times, Dr. Dickson told us, the able were more valuable than the disabled. Yet the Christian proclamation and demonstration that all people are created with the imago dei (the image of God) means despite your status, role, function, or parents, we are all equal in worth, value, and standing. The early Christians would rescue the discarded unwanted baby girls who were left outside on the rubbish dumps to be exposed to die. For this they endured the mockery and ridicule of their culture but simultaneously created a cultural shift so that by the late fourth century the Emperor decreed that infanticide was now prohibited.

In light of how Christ had changed the way the world viewed people, He had made the world a more just and compassionate place. At the end of the ceremonial proceedings, Rev. Alistair Bain, of St. John’s Presbyterian Church Hobart, who was formerly practicing as a lawyer, invited members of the police and legal profession to stand and “rededicate yourselves to the ideals and principles of your profession, to preserve and maintain the integrity of your role and to uphold justice in society.” This invited a formal affirmation which those present declared, “We dedicate ourselves anew to live and act with truth, justice and integrity and honour for the common good of all.”

I have the highest admiration for those in the legal and justice system. My own daughter is training to be a lawyer (2nd year ACU). But it is the Church that is at the front end of compassion and justice in a society. If those at the back-end of compassion and justice see the need to “rededicate” and “dedicate anew” to the ideals necessary for this profession to deliver this, how much more do we at the front-end need to? Our next chapter as a church is going to be one of increased effectiveness in showing and ministering this compassion to our our society which is increasingly hurting, lonely, confused, and broken. I invite you, at the start of this new church year to join with me in dedicating ourselves to being Christ’s hands and feet in a broken, hurting, unjust, world. It takes more than just being good to be effective in delivering this level of compassion. It takes a church of dedicated Christ-followers who are prepared to follow the blood-stained footprints of our Master.