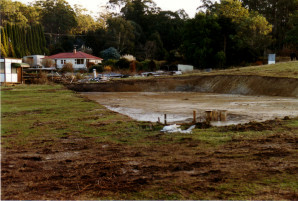 It was July 1995 when my life had a major course adjustment. We had recently pioneered a church in very tough part of Melbourne. We had seen the church grow quickly and saw some amazing stories of conversion to Christ happen before our eyes. In three years, the hall we were meeting was just about full. We had a Board that loved our church and helpe to oversee our growth. Then God spoke. Our time was up. I remember the following Sunday when our resignation was announced to church and it was met with tears from the congregation. The shock, sadness, and disappointment was quickly forgotten when it became obvious who God had already prepared to take over. We were presented with several opportunities by the leadership of the Assemblies of God, but none of them were God’s will for us. Then one, very none-eventful, night, God spoke to me. “I’m sending you to Tasmania!” We didn’t know anyone in Tasmania. We arrived unknown, unannounced, and uninvited. 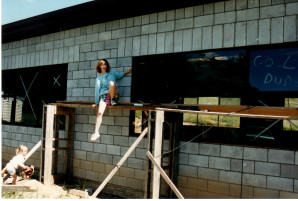 I was invited to preach at Legana Assembly of God on Sunday September 10th, 1995 which met in the Legana Memorial Hall. The following Sunday, September 17th, was the existing pastor’s last Sunday, and after I had preached the week earlier, the pastor asked me if I would be prepared to have my name presented to the church’s members as their next pastor for them to vote on. Perhaps because I was the only candidate these 17 members had to choose from, I got their vote and commenced as pastor of Legana on Sunday September 24th 1995. In the hand-over from the outgoing senior pastor to myself, I boldly declared that God had revealed to me that this was the church I was to sow my life into and that it would grow to be a church of hundreds. The pastor and his assistant smiled at me with one of those ‘I’m-smiling-on-the-outside-smiles-because-on-the-inside-I-think-you’re-an-idiot’ smiles. I guess they thought, “This guy is stupid! How could this church ever be hundreds of people when the whole town of Legana is only 1500 people?!”

And I tell you, you are Peter, and on this rock I will build my church, and the gates of hell shall not prevail against it.
Matthew 16:18 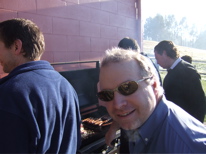 Because Christ told Peter that He would build His Church, His words have shaped my life as a minister within His Church. Time and time again the Holy Spirit has caused me to see how Christ is far more concerned for our church than I could ever be! And with my mind’s eye I occasionally get what seems to be a glimpse of what He has in store for us – where I again see a church of hundreds of people – which I saw before I even commenced my pastorate at Legana. In my early years, in my energetic exuberance, I gave glimpses of my glimpse to my congregation. This was largely met with looks of indifference – and a few gave me those same creepy smiles that the outgoing pastor and his assistant gave me the first time I shared it! Then there were those who baled. They left with claims that since I wanted more people to come to Christ and join His Church I obviously didn’t care too much for them. Undaunted, I persisted in teaching several sermon series on Christ’s vision, mission, and make-up of the church. Still, not many caught a glimpse of the glimpse. But some did. And they rolled their sleeves up too and joined me behind the plow.

Does he not speak certainly for our sake? It was written for our sake, because the plowman should plow in hope and the thresher thresh in hope of sharing in the crop.
First Corinthians 9:10

Ten Little Christians came to church all the time;
One fell out with the preacher, then there were nine.

Nine Little Christians stayed up late;
One overslept on Sunday, then there were eight.

Eight Little Christians on their way to Heaven;
One took the low road, then there were seven.

Six Little Christians seemed very much alive;
One took a vacation, then there were five.

Five Little Christians pulling for Heaven’s shore;
One stopped to take a rest, then there were four.

Four Little Christians each as busy as a bee;
One had his feelings hurt, then there were three.

Three Little Christians couldn’t decide what to do;
One couldn’t have his way, then there were two.

Four Little Christians worked early and late;
Each brought one, now there were eight.

Eight Little Christians if they double as before;
In just seven Sundays, we have one thousand twenty four.

In this jingle there is a lesson true;
You belong either to the building, or to the wrecking crew.

I was speaking with a pastor this week who said that he believed God gifted local churches with particular strengths that made them unique. He believed each church then played a part in contributing to God’s plan for their city. The part we are gifted to play is a part of our ongoing story which is summed up in our symbol.

Churches take on a shape based on their strengths, giftings, resident ministries, and leadership. It’s a beautiful thing that God places His children in appropriately shaped churches. This also includes where He places certain pastors. Naturally (or perhaps I should say, supernaturally), churches can change shape as they grow. This is why it is important for a church to understand who God has called it to be. This is what we might call a church’s identity.

Rather, speaking the truth in love, we are to grow up in every way into him who is the head, into Christ, from whom the whole body, joined and held together by every joint with which it is equipped, when each part is working properly, makes the body grow so that it builds itself up in love.
Ephesians 4:15-16

Some churches have the shape of a corner store. All of the customers are regulars. They know they can their newspaper, milk and bread and a few treats in their corner store. They also probably know the owner of the corner store. Some churches are like department stores who not only sell milk, bread, and newspapers, but they also a wider range of items in their departments. Customers probably don’t know the manager of the store, because they are more likely to know the department staff they see regularly. And still, some churches are like shopping centres where customers come because they enjoy the experience of being there and the almost unending range of things that are offered.

Dogs, like churches, come in different shapes. There are really small dogs. There are really big dogs. But the strange things about really small dogs is that they are the most ‘yappy’ of all dogs! It’s as if they think they can bluff bigger dogs into thinking that they are actually larger than they are – if they bark a lot. When a really big dog, such as a Great Dane, enters into a compound of various other dogs, there is no doubt in the other dogs’ minds that this Great Dane is bigger than them. Yet, the Great Dane doesn’t have to yap and bark to demonstrate how big it is. Churches can be like dogs. I think we should carry ourselves more like a big dog than really little dog. This requires a big attitude, a big heart, and a big role in protecting the people of our community – even if they aren’t members of our church.

While we are in a canine mood, I also think that within a church comprised of what Jesus described as sheep (John 10:11-14). Australian shepherds use trained sheep-dogs to direct, care for, and protect their sheep. Despite the benefit these dogs undoubtedly provide for sheep, sheep have a natural aversion to dogs. Within a local church, God places a shepherd and then calls people to assist by serving as ‘sheep-dogs’ (elders, home-group leaders, team leaders, department leaders). Charles Spurgeon writes in his book, Soul Winning, that his success as an evangelist was largely due to his ‘hunting dogs’. He describes an incident where he was talking with one of his deacons after a Sunday morning service whose eyes were scanning the balcony of their church sanctuary as they chatted. Spurgeon, says that he was mid-sentence when the deacon suddenly excused himself and darted up into balcony. Upon returning some time later it was discovered that the deacon had spotted a person in anguish of soul and had approached them with an offer of leading them to Christ which was accepted.

I hope that we can become a church of sheep who are being transformed into big dogs, sheep-dogs and hunting-dogs. When we are called upon to explain our commitment to Christ and His Church, it is reassuring that because we are on the side of truth, we can present our case reasonably without sounding like a little dog trying to bluff those around him.

but in your hearts honor Christ the Lord as holy, always being prepared to make a defense to anyone who asks you for a reason for the hope that is in you; yet do it with gentleness and respect,
First Corinthians 3:15

First Responders are members of the Emergency Services (Police, Ambulance, Fire Brigade). Even when these people are off-duty, they are still ready to be on-duty. When they attend a disaster, they arrive equipped, in uniform, and ready to implement their training. They enter into the disaster – but they distinct from it.

I hope that our church equips everyone to have the demeanour of a First Responder. That when we go about our daily activities we ready to be on-duty by sharing the Gospel’s message of hope and forgiveness with those whose lives have crashed.

The vision for our church over the next few years isn’t just about our church growing to hundreds and hundreds of more people, or having improved facilities, or more staff, or more programs, it’s about who we are becoming in the process. It’s about answering the call from God to be a difference where it is needed. It’s about stepping up so that we can step out into a world that doesn’t know how to do life/relationships/love very well. It’s about caring enough to pray for the lost, hurting, and broken in our community to come to the Refuge. It’s about being present where it’s messy – equipped to help, in ‘uniform’, ready to implement our training. It’s about a greater commitment to the assembling of God’s people that at times will require sacrifice and raise questions from those who want what you have been found for.