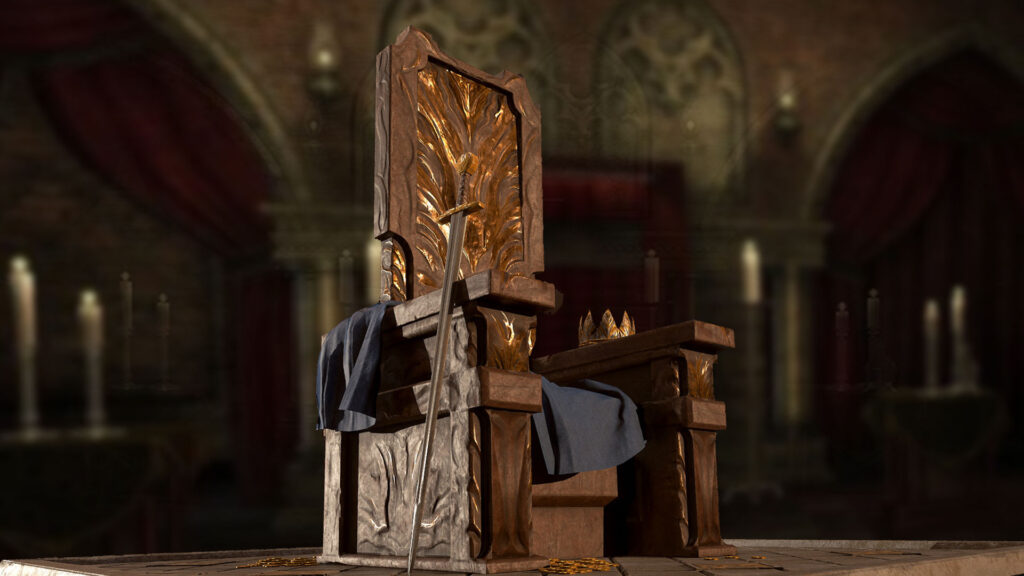 It might seem like things are getting increasingly difficult for Christians today (and for good reason). But take a moment to reflect on when the LORD chose to birth the New Covenant Church. Firstly, it was during the rule of the Roman Caesars. To the Romans, life was cheap. When Julius Caesar fought the Gallic Wars, he oversaw the deaths of one million Gauls, the enslavement of another million, and the execution (often by crucifixion) of yet another million*. Then came his battle with another Roman general and his forces, Pompey, who was originally Caesar’s patron and was now himself vying for the throne of the emerging Roman Empire, thousands more died in the battle (after Caesar essentially declared war by crossing the Rubicon River – the boundary of the city of Rome which no army was allowed to cross). After this victory, Caesar was named “dictator in perpetuity” of the Roman Republic*. But when the senate feared that Caesar also desired to be crowned Emperor, he was assassinated by sixty knife-wielding senators led by Marcus Junius Brutus (from whom we now derive the word, brutal) near the theatre of Pompey who feared that he would abolish the senate. Rome then entered into civil war with the forces of Mark Antony fighting the adopted son of Julius Caesar, Octavian — who would defeat Mark Antony’s forces and then himself be crowned Emperor and introduce a new title into the Roman vocabulary: Caesar (Supreme Emperor). The senate bestowed on him the name The August One (‘Augustus’).

¶ In those days a decree went out from Caesar Augustus that all the world should be registered.
Luke 2:1 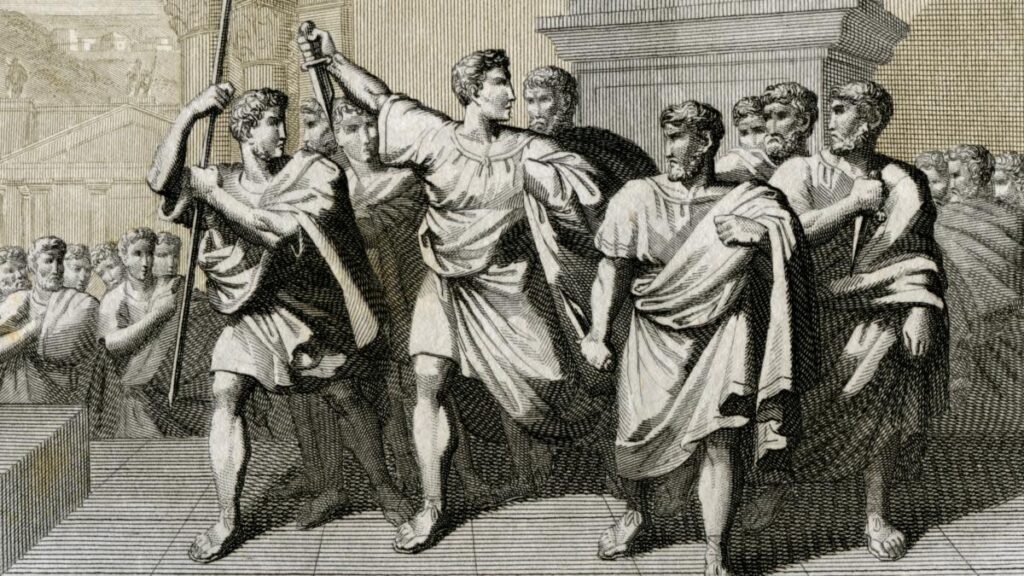 While Julius was the first king of what had become Rome’s kingdom, it was Augustus who became the first emperor of Rome. After him came a succession of Caesars all related either by marriage or adoption until Imperator Nero Cladius Divi Claudius Filius Caesar Augustus Germanicus. In November of AD 64 Caesar Nero began a tyrannical campaign to eliminate Christians from around his empire. Dr. Kenneth Gentry states-

“For Christians he was especially a dreadful emperor. The Roman historian Tacitus wrote of his persecution, which was not only the first, but one of the cruelest in Rome’s gory history, that Nero ‘inflicted unheard-of punishments on those who, detested for their abominable crimes, were vulgarly called Christians. . . So those who first confessed were hurried to the trial, and then, on their showing, an immense number were involved in the same fate.’ ”
(Kenneth Gentry, ‘Dating the Book of Revelation’, p. 77-78)

And the bishop of Rome, Clement, writing around AD 95 said of Nero’s campaign of terror against Christians that, “a vast multitude of the elect . . . through many indignities and tortures” (First Clement 6:1). When a Roman describes someone killing a ‘vast multitude’ of Christians we can only wonder how many hundreds of thousands he means. The Roman world of the first century in which the LORD ordained for His Church to be established was a deadly place where life was cheap. At that time, in the city of Rome, one in five residents was a slave (Ferguson, Backgrounds, p. 56). Outside of Rome though, as I wrote in my previous Pastor’s Desk, in some instances, up to half of a city’s population (such as Ephesus or Antioch) were slaves with no rights what so ever. And then along comes Jesus and a global revolution began.

Consider the world and its values at the time that Jesus the Christ took on flesh. It was a world where –

THE DAY THE REVOLUTION BEGAN

When Jesus entered into His world to walk amongst His creation, He was not clothed in kingly arrogance and pomp. Everything about Him was contrary to what the Jews hoped their Messiah was to be. But His life, manner, ministry, mission, revolutionised His disciples who then realised that Rome (and even Jerusalem) were agents of death – both temporal and eternal – but Jesus the Christ was Lord of Life!

that whoever believes in Him [Jesus] may have eternal life.
John 3:15

¶ “For God so loved the world, that He gave his only Son [Jesus], that whoever believes in Him should not perish but have eternal life.
John 3:16

Whoever believes in the Son has eternal life; whoever does not obey the Son shall not see life, but the wrath of God remains on him.
John 3:36

but these are written so that you may believe that Jesus is the Christ, the Son of God, and that by believing you may have life in his name.
John 20:31

And you killed the Author of Life, whom God raised from the dead. To this we are witnesses.
Acts 3:15

This set in motion a global revolution. Not one conducted by military might, but one that transforms human hearts. Over the next few centuries, despite massive State and religious persecution, the influence of Christ continued to revolutionise human souls. Women, long looked down upon, were now elevated to a status previously unimagined possible. Slaves, who were mistreated, oppressed, and denied all rights, were told that in Christ they were now ‘citizens’ of His Kingdom and adopted by the King Himself. The diseased, malformed, injured, frail, and elderly, were declared to be infinitely precious and promised by divine guarantee that they would receive new glorious resurrected bodies without disease or deformity upon entrance into Christ’s eternal kingdom.

Consider the ravens: they neither sow nor reap, they have neither storehouse nor barn, and yet God feeds them. Of how much more value are you than the birds!
Luke 12:24

The realisation of this revolution cause believers to see others differently. Instead walking past the newborn babies taken out into the nearby forests and caves, Christians began to ‘adopt’ these abandoned children and raise them as their own. Every life mattered to these early Christians because every life was precious. This is why this form of ancient post-birth abortion was vigorously opposed by the early Christian who did more than protest, they raised any unwanted children they could find.

The catacombs are filled with very tiny graves with the epitaph “adopted daughter of…” or “adopted son of…” inscribed on them. These inscriptions refer to the many babies and young children Christians rescued from the trash over the centuries. Tertullian says Christians sought out the tiny bodies of newborn babies from the refuse and dung heaps and raised them as their own or tended to them before they died or gave them a decent burial. 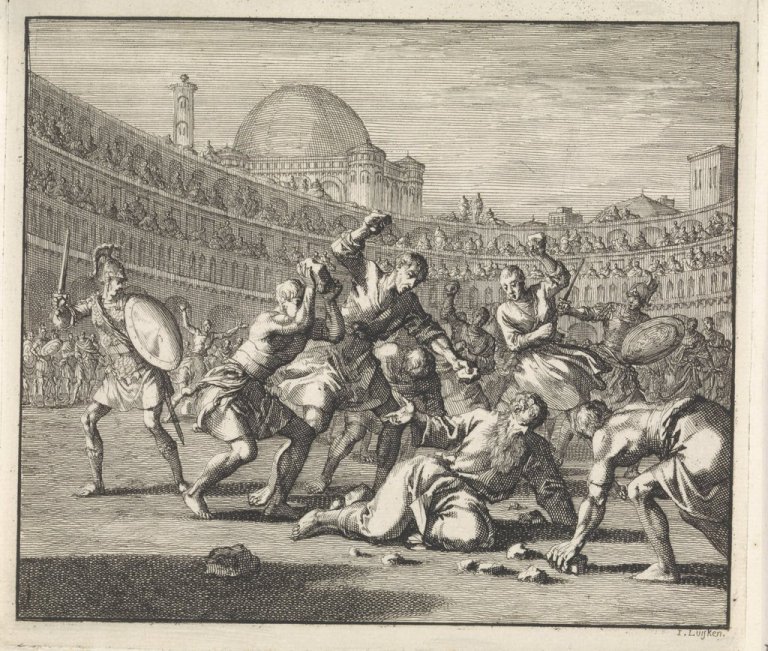 A depiction of the stoning of Telemachus who denounced gladiatorial games

Instead of participating as another spectator at the bloody gladiatorial games, Christians, such as Telemachus, publicly denounced them as barbaric and did what he could to end them. His campaign was short but successful and costly (he was stoned to death by the angry spectators) and it resulted in this grotesque bloodsport ending in AD 404*.

Christians went into leper colonies and cared for the diseased which led to the later development of hospices and hospitals. By the fifth century, Emperor Julian the Apostate who wanted to reestablish the ancient pagan worship of gods, conceded that his efforts were continually thwarted by pesky Christians who cared so well for the vulnerable — even when the vulnerable were not themselves Christians.

But during the reign of terror instigated by Caesar Nero who had put both Peter and Paul to death and banished the last known disciple of Christ, John, to the Island of Patmos, things looked very bleak for the fearful and remaining Christians. While a despot sat on the most powerful throne in the then known world, the Apostle John received a revelation of the True King who sat on the real throne (Revelation 4:2). While many people speculate about the details of the closing book of the Bible, there should be one very obvious truth that we can all acknowledge. While the world played host to one tyrannical blood-thirsty dictator after another and seemed hell-bent on promoting death at every turn, there was One who was on the True Throne, and He was (and is) the True Lord and the True King. Even though He might look like a weak and meek little lamb, it would be Him, who would conquer and reign.

They will make war on the Lamb, and the Lamb will conquer them, for He is Lord of lords and King of kings, and those with Him are called and chosen and faithful.”
Revelation 17:14

This is why we never lose sight of the real throne even today when once again it seems that the powers that be are hell-bent on treating some people merely as objects of personal sexual gratification and life – especially the developing and fully developed – as cheap and utterly disposable. And like the early Christians such as Telemachus, we need to speak up on behalf of the oppressed and vulnerable and spread even further the glorious vision of the one who truly reigns on a throne that we will each one day all behold with our own resurrected eyes!