¶ May God Himself, the God who makes everything holy and whole, make you holy and whole, put you together—spirit, soul, and body—and keep you fit for the coming of our Master, Jesus Christ.
First Thessalonians 5:23 THE MESSAGE 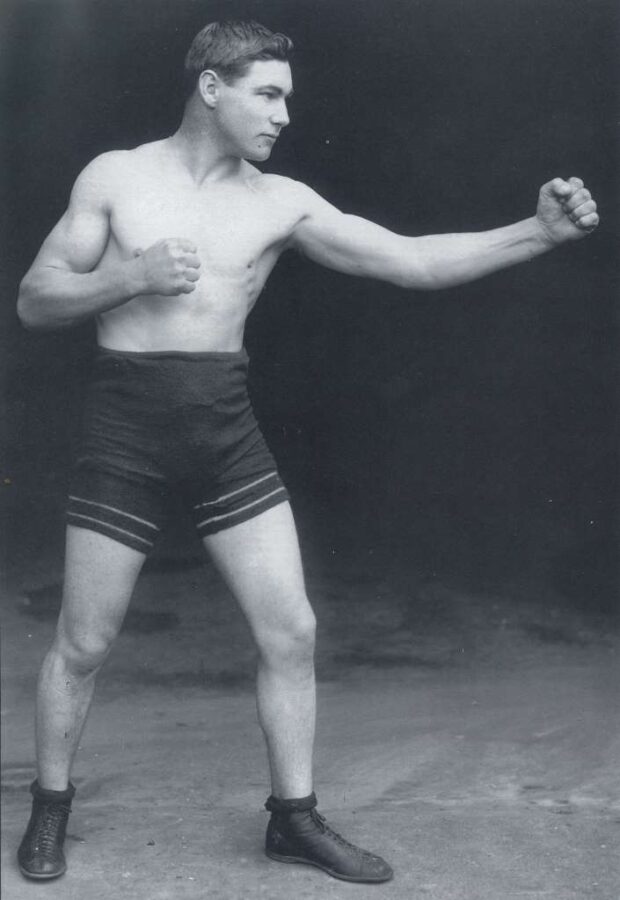 After defeating all-comers by late 1916, Les Darcy wanted to accept the offers to box in the United States against the world’s best. When word of this spread within Australia, people began accusing him of dodging the war effort that was desperately looking for fit young men to go to the frontline. To escape the furore over this he stowed away on a ship bound for the USA to take up the promoter’s offer of a new title fight. But the rumours followed him to America and their boxing federation then banned him from fighting. Dejected by this unfair setback, Darcy’s woes were compounded by what he may have thought was prolonged sea-sickness. While resting in Memphis, Tennessee, it soon became apparent that Darcy wasn’t merely suffering from sea sickness. Doctors diagnosed him with septicaemia which by this stage had resulted in multiple complications. His sweetheart had arrived by another ship from Australia and rushed to his bedside to be with him as he took his last breaths. His body was embalmed and returned to Australia where an estimated half a million mourners paid their respects. Australia had forgiven their favourite son.

There’s something profoundly perverse if you like, in the Australian psyche that feels most love for a good loser.”
D’Arcy Niland, Great Australian Writer (writing about the response to the death of Les Darcy in 1917)

While Darcy’s ‘moment’, which ended so tragically, may have once been seen as dramatic, but recent events surrounding how some people have responded to the coronavirus has changed all that. In fact, the spread of the coronavirus provides a great metaphor for how a fleeting moment can dramatically change a person’s life spiritually. Life is full of moments, but not all of them are the moments that change our lives. These moments are not always obvious. They may last just a few seconds. They could be times during a seemingly innocent interaction with someone, where, in a moment (of anger or frustration or envy or hatred), our soul becomes tainted with a spiritual poison that slowly spreads throughout our soul infecting our hearts with fear, pain, and disconnection.

Like a city that is broken down and without a wall, so is a person who cannot control his temper.
Proverbs 25:28 NET

HOW TO DISINFECT YOUR SOUL

It only takes an unguarded moment to get hurt by someone’s words or action. I say unguarded because the Spirit-filled believer enjoys the spiritual vaccine of the Holy Spirit which releases spiritual antibodies into our soul every time we are tempted to harbour a hurt. These ‘antibodies’ are listed in the Apostle Paul’s description of the fruit of the Spirit: love, joy, peace, patience, kindness, faithfulness, and gentleness (Gal. 5:22-23). Not only does the Holy Spirit work within us to produce these spiritual antibodies, He also takes God’s Word and uses it to cleanse our soul from anything that has tainted it.

¶ Since we have these promises, beloved, let us cleanse ourselves from every defilement of body and spirit, bringing holiness to completion in the fear of God.
Second Corinthians 7:1

This is why the Word of God — read, studied, preached — is so important to the health of our soul. The unique and mysterious power of God’s applied Word is seen in Christ’s command to Peter to come to Him out of the boat and to walk on the water.

He said, “Come.” So Peter got out of the boat and walked on the water and came to Jesus.
Matthew 14:29

The spiritual power to obey God’s command is found in the command. This is why simply prayerfully reading, hearing, or studying God’s Word is able to cleanse, or disinfect, a soul.

And He said to them, “Take care, and be on your guard against all covetousness, for one’s life does not consist in the abundance of his possessions.”
Luke 12:15

Covetousness is not the only thing that we should be “on guard against”. It’s not the only thing that can poison a soul for which we must be on guard. But covetousness, or envy, or greed, are things that we should deal with like a sentry guard when they attempt to infect our souls. To cleanse our souls, as described in Second Corinthians 7, from spiritual viruses involves enabling the Holy Spirit to help us to build up the necessary ‘antibodies’ of thankfulness, gratitude, worship, and generosity.

Whoever oppresses a poor man insults his Maker,
but he who is generous to the needy honors him.
Proverbs 14:31

And day by day, attending the temple together and breaking bread in their homes, they received their food with glad and generous hearts,
Acts 2:46

¶ Command those who are rich in this world’s goods not to be haughty or to set their hope on riches, which are uncertain, but on God who richly provides us with all things for our enjoyment. Tell them to do good, to be rich in good deeds, to be generous givers, sharing with others.
First Timothy 6:17-18

WOUNDS THAT HURT IN A MOMENT

Les Darcy began to feel unwell a few weeks after his post-bout dental work. No one saw a connection between the two events. By the time he arrived in Tennessee, USA, the false rumour that he was fleeing military service in Australia had led to their boxing federation banning him from boxing. No doubt these rumours, and the American Boxing Federation’s response to them, would have deeply hurt Les. He must have been rather dejected at this time since his trip had been for nothing. But it was a brief, innocent, innocuous moment with a dentist, who had failed to take the necessary precautions, that caused the greatest pain to Les Darcy. In May 1917 American doctors diagnosed Les Darcy with advanced septicaemia (infection throughout his internal organs) that rapidly led to his death on May 24th.

There is an immediate spiritual parallel with the ballad of Les Darcy. The words and actions of others designed to hurt us, often delivered in the briefest of moments, can (if left un-disinfected) injure us for life and in the process infect us with bitterness, resentment, and hatred. Its in the aftermath of these moments where we are tempted to mull over these hurtful words and actions that we risk aggravating our wound. But for the Spirit-filled believer there begins a soul-stirring, therapeutic work of disinfecting these momentary hurts with the forgiveness that only one who has been eternally forgiven could even begin to understand. Little wonder then that the Christ concluded His model prayer for us with words that sound like disinfectant for our soul.

and forgive us our debts,
as we also have forgiven our debtors.
Matthew 6:12

Les Darcy’s life ended prematurely at the age of twenty-one. Many commentators believe that he could have gone on to become one of the greatest boxers of all time. But his positive future was cut short because of a brief negative moment. When the momentary words and actions of hurtful people are left untreated they can negatively shape us for the rest of our lives and deny us our potential of living a positive future – both now, and if we’re not careful, for eternity.