The gospel of John provides us with two examples of the way that Jesus interacted with people who were not His followers. His interaction with an adulterous woman and man suffering from infirmity provide us with a template for how we as followers of Christ can interact with people who are embedded in a culture that does not recognise that there is a God, and are unaware of the eternal implications of this lack of knowledge. Jesus’ approach was situational and shows us that people can be reached through relationship without compromising on the need for them to recognise and respond to the problem of sin in their life.

Change and new beginnings can be difficult. This is particularly the case for those of us who do not really like change. Implementing change requires knowledge as well as the discipline needed to break from the “we have always done it that way” mode of thinking to one where we are prepared to adapt to and rehearse the changes until they become normalised.  One area that Jesus taught us that must be changed in our life is the way that we deal with the problem of sin and the behaviours associated with it. Jesus’ references to sin and its effect on us are a statement of fact. He didn’t beat about the bush and left no room for misunderstanding.

Jesus answered them, “Truly, truly, I say to you, everyone who practices sin is a slave to sin. The slave does not remain in the house forever; the son remains forever. So if the Son sets you free, you will be free indeed.
John 8:34-36

Although this claim is confronting, it is tempered by a solution that is available to us all. Jesus, the Son of God is eternal. He remains forever and can set us free from the enslavement sin brings into our lives. As a result, we can take comfort from the fact that we are able to experience the freedom that comes from knowing that our sin is forgiven when we accept Jesus as our Lord and as our Saviour. However, the challenge that we face as followers of Christ is how to share this important information with others in a way that is winsome in our role as ambassadors for Christ.

Therefore, we are ambassadors for Christ, God making his appeal through us.
Second Corinthians 5:20

FROM LITTER TO NEW LIFE

While I was riding my mountain bike at Hollybank Forrest Reserve last week, I passed through a grove of deciduous trees. The ground in this area was wet, cold and covered in the leaves that had been shed throughout autumn. On looking at the area, it was clear that some plants were beginning to send up shoots through the decaying leaf litter in preparation for the next phase of their lifecycle. 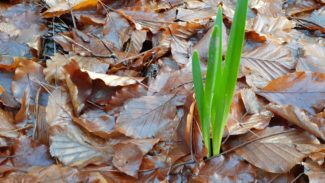 Initially, these plants send up shoots that are not immediately recognisable as the fully mature plant. However, the beginnings of this plant are distinct from the surrounding bed of dead leaf litter. Given time, the shoots will continue to grow upwards and develop into the plant they are designed to be, and will come into flower and propagate.

The approach that Jesus used when informing people of the dangers associated with sin is similar to the plant growth process. He was firm in His instruction, but did not always confront the people He was ministering to in an insensitive manner. In the case of the woman caught in adultery, which is described in John 8, Jesus first saves her from being condemned to death by stoning. It is after doing this, having gained a degree of trust, that He tells her that she needs to change her behaviour.

Another example of this approach can be found in Jesus’ healing of the invalid man at the pool called Bethesda as described in John chapter 5. First, Jesus asked the man if he wanted to be healed,  proceeded to heal him and then He left the pool without any further conversation. It was during a second encounter at the temple that Jesus made it clear to this man that there were worse things than infirmity.

Afterward Jesus found him in the temple and said to him, “See, you are well! Sin no more, that nothing worse may happen to you.” The man went away and told the Jews that it was Jesus who had healed him.
John 5:14-15

In both of these encounters we see that Jesus did not bluntly call out the sinful actions of the person He was ministering to. Instead, He showed love and compassion first and did not insist that they believe in Him before He would minster to their needs. In this way, He gently showed them who He was in a manner that is similar to the green shoots emerging from the cold, dead ground. By showing grace, Jesus allowed these people to experience the love of Christ and begin to recognise what was beginning to grow in them – the realisation that they had been ministered to by Jesus Christ, who was their creator.

In 1998, when I was an enthusiastic but naïve new Christian, I learned from personal experience that nothing is more likely to elicit a hostile response to the saving grace that is available through Jesus Christ than initially calling out a person’s need for Jesus in their life. I’m so pleased that God has since worked around my blundering good intention with this person. As ambassadors for Christ we should, I believe, consider adopting a gentle, but firm approach that we see modelled in they way Jesus related to these to people. This should be irrespective of the sense of urgency we feel for people we know who are unsaved. Relating to people with gentleness and respect tends to bring growth and positive outcomes.

Peter  reminds us of how we should develop a conversation with people who don’t yet know Jesus. This process involves being aware of the effect of our own behaviour as well as the benefits of an encounter that is seasoned with gentleness and respect.

but in your hearts honour Christ the Lord as holy, always being prepared to make a defence to anyone who asks you for a reason for the hope that is in you; yet do it with gentleness and respect, having a good conscience, so that, when you are slandered, those who revile your good behaviour in Christ may be put to shame.
First Peter 3:15-16

Jesus has shown us that there are some situations when there are benefits to allowing dialogue to come before hitting hard about what a person has done and pointing out their flaws. When Jesus adopted this approach, He did not compromise on the need for people to recognise wrong behaviour and turn from it. Even though it was not shouted, Jesus made His message to the man healed of his infirmity and the saved adulterous woman clear and unambiguous.

Most people respond to a quiet voice more readily than to blunt accusations that tend to trigger a defensive response that shuts down a dialogue about Jesus and His saving grace. As people engage with our quiet voice, they may respond, and in doing so they become like a shooting plant that rises above the decaying litter that surrounds them. They can then begin to grow in Christ as they abide in Jesus and eventually begin to flower and bear fruit in accordance with God’s plan for their new life. 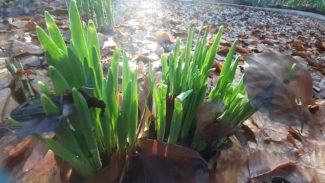 We know it is God who changes hearts and it is the Holy Spirit who will convict people of sin. I believe it is our job to show the love of Jesus and to love the sinner even though we disagree with their current lifestyle choices, without compromising our Christian values. Is there someone you know who has had an encounter with a well-meaning but insensitive Christian and needs to experience the grace of God?