When we are living, working and recreating on land, we are doing so in what is generally a stable environment. With the exception of events such as earthquakes, we experience the surface of the continents we live on as stable and immovable. When we put a plate on a table, it remains in place. When a truck driver parks a truck, the application of the parking brake ensures the truck and the load it is connected to remain in place. Our experience has taught us that we should not need to plan for the surface we are living on to start shifting the way that a ship’s deck moves at sea. An exception to this is when the stability of life as we expect, begins to shift.

Any person who has not had the opportunity to become familiar with the way that the crew members of a ship set up and operate in their working and living environment is likely to be surprised at some of the differences between the shipboard and the shore side environments.

The visitor to a ship will notice that there are handrails located on the walls of alleyways, there are anti-slip rubber mats on cabinet tops and on table tops. Bookshelves and tables have barriers to keep their contents in place, and the beds have a sideboard that helps prevent the occupant being thrown out of bed when the ship is moving in a seaway. The units of cargo carried on board are secured via a cargo securing system that takes into account its weight, the height, and that the cargo is stowed above the ship’s keel. 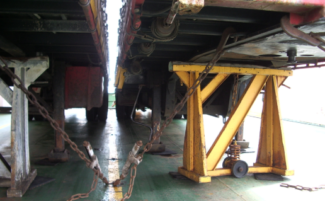 Cargo secured for sea. Each chain has a 10 Tonne break load. T.Boyle

For the uninitiated, the movement of a ship in response to both internal and external forces can present some interesting challenges. A ship is subject to movement around a number of axes. Two of these are rolling and pitching motions. Both result in significant movement of the deck. Rolling is the side to side movement of a ship due to lateral forces from waves accelerating the hull sideways. 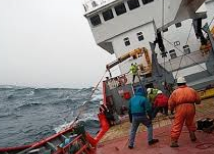 Crew members adjusting their stance on a a rolling ship. www.youtube.com

Pitching is a movement where the bow of a ship dips and rises in response to encountering waves head on or if waves are overtaking the ship. Both motions demand a response from the crew.

When what is supposed to be a horizontal surface is tilting, everyday tasks require a rethink. As a ship rolls, it accelerates in one direction reaching an angle where the ship’s internal stability halts the roll and then accelerates it back in the opposite direction. The roll angle may be something like 15-20 degrees and have a period of about 20 seconds. This changing acceleration force tends to throw people or any object not secured in one direction, then in another. This makes walking a task where the crew learn to compensate for the expected acceleration force so they are not thrown into the wall or off their feet.

Occasionally a ship will encounter a very large wave. This causes a rapid acceleration and can throw people off their feet unless they are able to reach out and grab hold of something solid. This solid object is usually a handrail or a hand hold. The act of reaching for the handhold is instinctive. An experienced seafarer knows when they will be unable to maintain balance and seeks the stability of the handhold he or she is close to.

As we move through our life, some of us are blessed with long periods of stability. The ground we live on may tilt gently every now and then but not enough to throw us off balance.  For others, living presents regular challenges with the ground they live on frequently tilting in one direction followed by another at regular intervals. In either case we must contemplate the answer to the following question:

What, or to whom do we reach out to for stability when our world is moving in weird and unexpected directions?

Two incidents recorded in the Gospel of Matthew will help to answer this question. Both involve people in perilous situations at sea.

The first is the account of Jesus quieting a storm.

And behold, there arose a great storm on the sea, so that the boat was being swamped by the waves; but he was asleep. And they went and woke him, saying, “Save us, Lord; we are perishing.” And he said to them, “Why are you afraid, O you of little faith?” Then he rose and rebuked the winds and the sea, and there was a great calm. And the men marveled, saying, “What sort of man is this, that even winds and sea obey him?”
Matthew 8:24-27

In this incident, the occupants of the boat recognised the potential danger in their changed circumstances and reached out for a ‘handhold’ – the steadying influence of Jesus, the Son of God. Jesus then rebukes the wind as well as the waves, miraculously calming the sea. In this act, Jesus demonstrates that He is in control of the elements. He is the person who the disciples reached out to in their anguish. He is also the person we can reach out to  to hold us steady and prevent us being tossed about by the worldly events we have to endure. Nothing that we experience has, or will ever be a surprise to Him. This can give us comfort when nothing seems to be going right with our health, relationships, employment or financial situations. Jesus is there for us in the midst of the storm.

The second example is the record of Peter beginning to sink after walking towards Jesus on the water.

But when he saw the wind, he was afraid, and beginning to sink he cried out, “Lord, save me.” Jesus immediately reached out his hand and took hold of him, saying to him, “O you of little faith, why did you doubt?”
Matthew 14:30-31

When we call out like Peter, who began to sink after stepping out of the boat to walk towards Jesus on the water, Jesus reaches out and supports us by providing us with the confidence that comes from knowing we are loved by the Creator of the cosmos.

OUR CREATOR – OUR ROCK

We can also find examples of people reaching out to God for stability and safety in the Psalms.

I love you, O LORD, my strength.
The LORD is my rock and my fortress and my deliverer,
my God, my rock, in whom I take refuge,
my shield, and the horn of my salvation, my stronghold.
Psalm 18:1-2

Jesus was also recorded when likening the stability He can provide to that of rock foundation.

Everyone then who hears these words of mine and does them will be like a wise man who built his house on the rock. And the rain fell, and the floods came, and the winds blew and beat on that house, but it did not fall, because it had been founded on the rock.
Matthew 7:24-25

So what should our response be when our world is rolling or pitching? I believe we need to be honest about the measures we put into place and about what, or who we reach out to and grasp for stability. We have a trustworthy record of numerous cases of people reaching to God during turbulent times in the Bible. What is made abundantly clear is that In Him we have a Father, a Comforter and a Saviour.

Through regular immersion in the Word and through prayer we can maintain our ‘handhold instinct’ and respond quickly reaching out to the One who we know we can trust to steady us when our lives are subjected to forces that are threatening to upturn our status quo. He gives us the strength and encouragement to adjust our stance, secure what is loose in our lives and to ride with the rolling deck.

Let’s keep close to our Creator.