FINISHING BEFORE YOUR FINISH 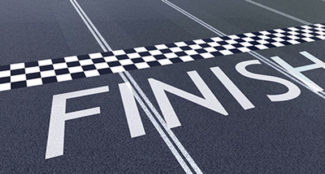 THE MISSION OF MOSES

At this time Moses was born; and he was beautiful in God’s sight. And he was brought up for three months in his father’s house, and when he was exposed, Pharaoh’s daughter adopted him and brought him up as her own son. And Moses was instructed in all the wisdom of the Egyptians, and he was mighty in his words and deeds.
Acts 7:20-22 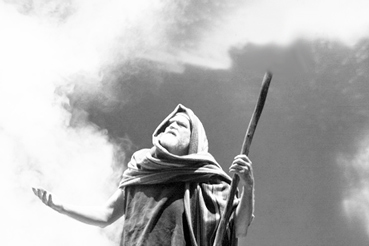 Moses lived with a sense of divine destiny. Although raised in the palace of Pharaoh, through the sovereignty of God, his mother was hired to help raise him. She would have impressed upon that he was chosen by God to be the deliverer of their oppressed people from Egypt. By the time he was 40 years old, he ‘supposed’ his time had come, but things went horribly wrong when he discovered that what was obvious to him was not at all obvious to anyone else!

¶ “When he was forty years old, it came into his heart to visit his brothers, the children of Israel. And seeing one of them being wronged, he defended the oppressed man and avenged him by striking down the Egyptian. He supposed that his brothers would understand that God was giving them salvation by his hand, but they did not understand.
Acts 7:23-25

By taking matters into his own hands without waiting for God’s time, he was forced to flee Egypt into the wilderness as a fugitive wanted for murder. What was to come now of God’s destiny for him to be the deliverer of Israel from the cruel hand of their Egyptian oppressors? Through his rash, hot-headed, arrogance the entire redemptive plan of God had now been derailed! But how God responded to this setback is one of the most magnificent insights into the identity and character of the redeeming God.

THE MISSION OF GOD FOR MOSES 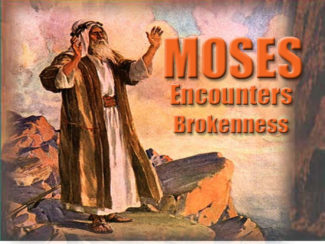 God has an amazing propensity for transforming our failures and mistakes into the tapestry of His grand plan. This is perhaps no clearer than how He redeemed Moses before He used Moses to redeem Israel. (God often does in us what He calls us to do in others.) Moses roamed the wilderness for 40 years as a shepherd. In the Palace of Pharaoh he would have been taught that the lowest job in the world was that of a shepherd (Egyptians despised sheep and despised shepherds even more – note Gen. 46:34; Exodus 8:26). This season for Moses would have been a very humbling one for him. But God knew what He was doing. In order for Moses to be redeemed and restored he need his arrogance eradicated and his heart transformed with meekness (see Numbers 12:3).

After the 40 years of humbling (note how Moses’ life was comprised of three 40 year chapters) he encountered God at the burning bush.

And Moses said, “I will turn aside to see this great sight, why the bush is not burned.” When the LORD saw that he turned aside to see, God called to him out of the bush, “Moses, Moses!” And he said, “Here I am.”
Exodus 3:3-4

The Moses who appeared before the Lord at the burning bush was not the brash, cocky, arrogant prince of Egypt. He was now the broken, humbled, contrite, unsure of himself, Moses. This encounter with Yahweh (the Hebrew name for ‘God’) was a moment of rededication to the Lord for Moses. (It has been noted by many that God never uses one for His glory without breaking them first.) In this sacred moment of surrender to the Lord Moses received his commission from God: Deliver Israel out of Egypt and into their Promised Land. 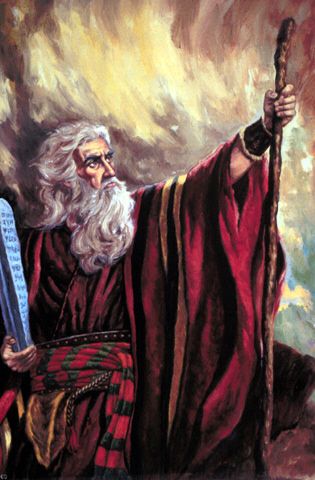 This commission came in 4 stages for Moses. With God’s help, Moses was able to finish Stage 1 – the affliction of plagues upon Pharaoh’s Egypt until Pharaoh relented and released the Hebrews. Moses was able to finish Stage 2 – the exodus of Israel out of Egypt through the Red Sea and onto Mount Sinai where the twelve Hebrew tribes received the Law of God and formed a covenant with Yahweh. Moses was able to finish Stage 3 of his mission – the 40-year wilderness wandering of Israel until a generation arose who were prepared to trust and obey God. Stage 4 of Moses’ mission was lead Israel into their Promised Land. But Moses never finished it. When Israel craved water again, God told Moses to ‘speak’ to the rock and God promised to pour water out of this rock for Israel to drink from. This was to be a powerful picture of how we are to approach Christ and receive living water from Him. But Moses disobeyed God.

“Take the staff, and assemble the congregation, you and Aaron your brother, and tell the rock before their eyes to yield its water. So you shall bring water out of the rock for them and give drink to the congregation and their cattle.” And Moses took the staff from before the LORD, as He commanded him. ¶ Then Moses and Aaron gathered the assembly together before the rock, and he said to them, “Hear now, you rebels: shall we bring water for you out of this rock?” And Moses lifted up his hand and struck the rock with his staff twice, and water came out abundantly, and the congregation drank, and their livestock. And the LORD said to Moses and Aaron, “Because you did not believe in me, to uphold Me as holy in the eyes of the people of Israel, therefore you shall not bring this assembly into the land that I have given them.”
Numbers 20:8-12 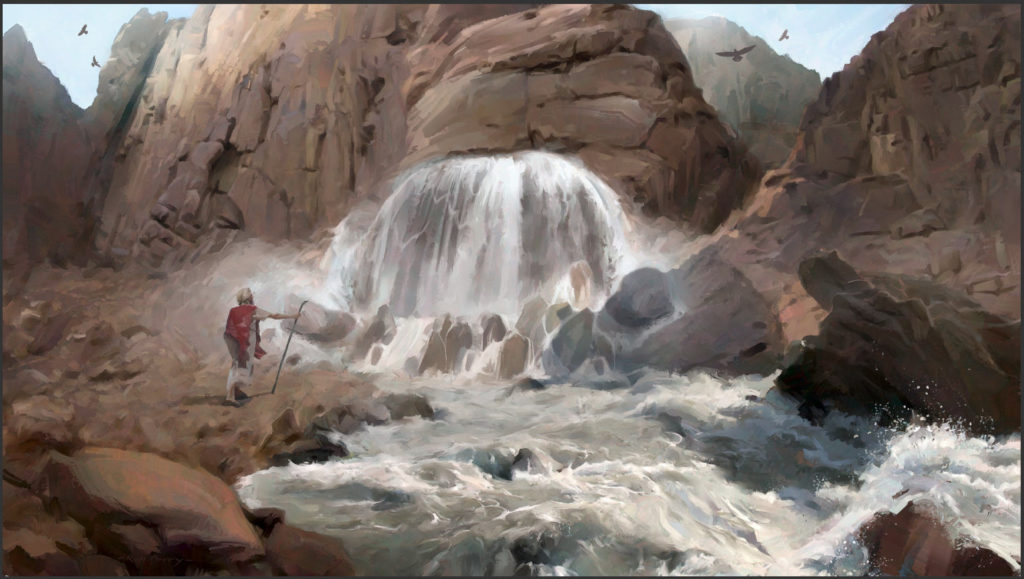 The consequences of Moses striking the rock twice were dire. The beauty of the picture of Moses speaking to the rock as a representation of how the believer was to look to their Saviour, Christ, was a powerful picture that God wanted Moses to demonstrate. Sometime before this incident, Israel had originally cried out for water at a time when they felt parched with thirst. They then pleaded with Moses for water. Back then, God told Moses to strike the rock and water would come out for all to drink.

Behold, I will stand before you there on the rock at Horeb, and you shall strike the rock, and water shall come out of it, and the people will drink.” And Moses did so, in the sight of the elders of Israel.
Exodus 17:6

This was a powerful picture of what the atonement (sacrificial death) of Jesus Christ would one day look like. But when Moses struck the rock for the second time he was desecrating what the atonement achieved and painting a picture that declared that Christ’s death on the cross was pointless. No wonder Yahweh was furious with Moses. “And the LORD said to Moses and Aaron, “Because you did not believe in me, to uphold me as holy in the eyes of the people of Israel, therefore you shall not bring this assembly into the land that I have given them”” (Num. 20:12). Moses must have been gutted. He had failed. He would later be led up to the top of Mount Nebo and showed the Promised Land, before he breathed his last.

¶ Then Moses went up from the plains of Moab to Mount Nebo, to the top of Pisgah, which is opposite Jericho. And the LORD showed him all the land, Gilead as far as Dan,..And the LORD said to him, “This is the land of which I swore to Abraham, to Isaac, and to Jacob, ‘I will give it to your offspring.’ I have let you see it with your eyes, but you shall not go over there.” So Moses the servant of the LORD died there in the land of Moab, according to the word of the LORD
Exodus 34:1, 4-5 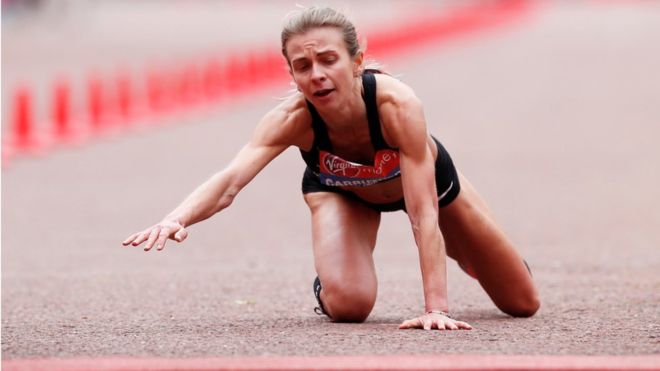 When a person’s life ends rather than finishes, it is sad. When a great leader fails to finish their mission through their own defiant stumbling, it is tragic. The circumstances of Moses’ death were tragic. Before he died, he commissioned Joshua to finish his mission; and Joshua did. This closing chapter of Moses’ life is surely one of the saddest in all the Bible. Moses entered into eternity as the leader called by God to establish one of the most foundational pillars in God’s redemptive plan who failed to finish it. All people are designed to find deep fulfilment by finishing – but leaders, like Moses, crave the fulfilment that comes from finishing. Moses died and entered into eternity without the leader’s greatest source of fulfilment and accomplishment: finishing.

Moses had longed to finish his mission and set foot in God’s Promised Land and then the day came that never comes after one enters heaven. This was the day he discovered that the day he entered heaven was the day he came face-to-face with the reality of all that the Promised Land foreshadowed—the Divine Christ. But this realisation probably didn’t occur to him until AD 30 when Yahweh sent him on a surprise mission.

¶ And after six days Jesus took with Him Peter and James, and John his brother, and led them up a high mountain by themselves. And He was transfigured before them, and His face shone like the sun, and His clothes became white as light. And behold, there appeared to them Moses and Elijah, talking with Him.
Matthew 17:1-3

It’s called The Mount of Transfiguration – the night that Christ took Peter, James and John, up a high mountain where He was ‘transfigured’ (His appearance radiated an incredibly bright light) and then Moses and Elijah appeared to Him. God graciously allowed Moses not just to see the Promised Land, but to set foot in it! Mission accomplished! And although it was night, Christ’s transfigured radiance permitted Moses to see up close what he once saw from a great distance. It was in this moment when God allowed His beloved servant Moses to finish his mission and enjoy eternity with the deepest sense of fulfilment. Yet, most importantly, this was the moment when He saw Christ as the fulfilment of all the Promised Land foreshadowed. God’s promise to Abraham was never really about dirt because it was always about Jesus.

And if you are Christ’s, then you are Abraham’s offspring, heirs according to promise.
Galatians 3:29

I’m pretty sure that when Moses got to stand in the Promised Land for the first time that night on the mountain with Christ, it was a thrill without measure, until he realised that he stood in the presence of mankind’s greatest Leader and Redeemer, the only One who could declare after He completed the ultimate mission and fulfilled Yahweh’s eternal plan of redemption, “It is finished!” (John 19:30).