THE PROBLEM WITH EVANGELISTS 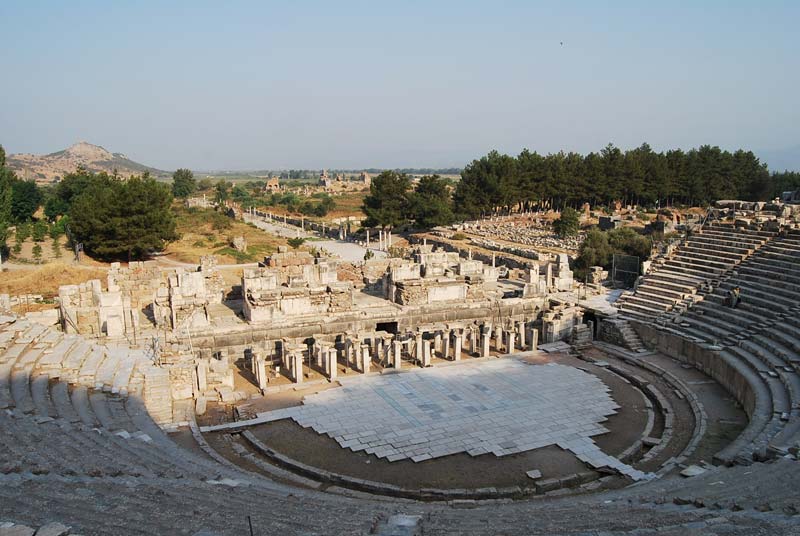 The ancient amphitheatre in Ephesus

When Paul wrote to the Ephesians he was writing to a church that had grown from 12 men meeting on a river bank (Acts 19:1-6) to what some scholars suspect was now a church of around 6,000 members meeting in houses around this major city. It was also a church that he had invested two years into (Acts 19:10). Ephesus was major port city and the centre for the worship of the idol, Artemis (Acts 19:24). From this strategic city Paul was virtually guaranteed to reach most that region (Asia-Minor) which Doctor Luke tells us Paul was actually able to do (Acts 19:10). Almost certainly, one of those who heard Paul preach and explain the gospel was a young man by the name of Epaphras. He was from the nearby town of Colossae. His life was transformed by the preaching of Paul. His soul was set on fire by the flame of the Holy Spirit. Maybe the apostle Paul himself also laid his hands on Epaphras whereby he was baptised in the Holy Spirit—just as the founding members of the Ephesian church had experienced (Acts 19:6). After spending some time sitting under the teaching and training ministry of Paul, Epaphras returned to his home-town of Colossae. Upon returning to Colossae, Epaphras preached to his townsfolk. The result was that a church was founded that quickly grew. Paul had never been to Colossae but when he wrote to them he commended the young Epaphras as a fine minister of the gospel.

just as you learned it from Epaphras our beloved fellow servant. He is a faithful minister of Christ on your behalf
Colossians 1:7

But Epaphras soon ran into trouble. His obvious evangelistic gifts had reached their limit. The church was now being infiltrated by false teachers who claimed to be Christians but held some very contrary views to what genuine Christianity was all about. In AD 62 and in desperation he went to find the Apostle Paul who had moved on from Ephesus and was now a prisoner in Rome. When Epaphras arrived there he sought Paul out and shared with him about the struggles he was having in correcting the errors that were leading people away from the true gospel. Paul decided to send Epaphras back with an epistle to the believers in Colossae.

Epaphras, who is one of you, a servant of Christ Jesus, greets you, always struggling on your behalf in his prayers, that you may stand mature and fully assured in all the will of God.
Colossians 4:12 In the first century, there was no postal service. Messages were carried by couriers and could be written or oral. When Paul sent Epaphras back to Colossae, he probably also gave him two other epistles to deliver as well. Since Epaphras would have had to sail into Ephesus, he probably carried the epistle to them (which was written as a circular letter [an ‘encyclical’] meant to be distributed to each of the seven churches in Asia-Minor). He would have also had Paul’s epistle to his old friend Philemon which Onesimus would have personally delivered to his old master.

¶ Epaphras, my fellow prisoner in Christ Jesus, sends greetings to you
Philemon 23

Paul’s three epistles carried by Epaphras (and then one of the three by Onesimus) are very revealing about three important insights. Firstly, to the church that Paul formerly pastored, Ephesus, there is no imminent threat of false teaching. Why? Secondly, to the church where his young protégé Epaphras had pioneered, there were serious doctrinal threats from false teachers which had the potential to eternally jeopardise the believers there (we explored this in our small groups earlier this year). And thirdly, Paul’s letter to his friend Philemon reveals how he helped to resolve an extremely serious conflict between an upset slave owner and a fearful runaway slave (ponder why Paul had the runaway slave that letter the last leg of the journey to his estranged master).

From what Paul wrote of Epaphras we see that Epaphras was a competent evangelist and loving pastor. Many pastors are excellent evangelists. While Paul had to write to Timothy to do the work of an evangelist (2Tim. 4:5) he had no need to say this to Epaphras. (I wish I was.) And I wish we had more evangelists—especially pastor-evangelists—today! But there is a problem with evangelists which is borne out in this episode with Epaphras. Paul’s apostolic calling manifested in his teaching-pastoral ministry (note Acts 13:1). He pastored the Ephesian church for two years – lecturing everyday (that’s equivalent to preaching each Sunday for about 12 years!)! Paul would later write to the next pastor of the Ephesian church, Timothy, and instruct him to continue to preach and teach sound theology to the Ephesians (2Tim 4:1-4) in which he condemned the errors and myths of false teachers and then urged Timothy do the same.

¶ I charge you in the presence of God and of Christ Jesus, who is to judge the living and the dead, and by His appearing and His kingdom: preach the word; be ready in season and out of season; reprove, rebuke, and exhort, with complete patience and teaching. For the time is coming when people will not endure sound teaching, but having itching ears they will accumulate for themselves teachers to suit their own passions, and will turn away from listening to the truth and wander off into myths.
Second Timothy 4:1-4

But doing this requires years of study and training. The apostle Paul was eminently qualified to do this due to his years of training as a scholar under the famous Jewish professor Gamaliel (see Acts 5:34 and 22:3). And no doubt, the two decades or so that Timothy was mentored by Paul would have equipped him to be able to do what Epaphras was unable to learn in the few months that he was mentored by Paul. But here’s where I have to admire Epaphras. Although he was overwhelmed by the sophistication and eloquence of the Gnostic teachers who were increasingly leading many Colossian believers astray, he was humble enough to seek out expert help. By appealing to Paul for help, Epaphras was acknowledging the limits of his own gifting. He was also recognising that God places different people with different gifts into different places within the Body of Christ. Thus, while Epaphras was a great evangelist and church-planter, he soon realised that he was not a philosopher-theologian—which was what was needed to deal with the Gnostics.

And that’s the problem with most evangelists. There are some evangelists who try to sound like teachers and worse still, theologians. This rarely goes well. That’s why Epaphras is such a great example for any evangelist today (especially church planting evangelists). And the relationship between Epaphras and Paul is also a great model for how we can all work together and contribute our strengths where others might be lacking and call on those with strengths where we might be lacking. Therefore, we don’t need to be an apostle or an evangelist to discover some great insights from the chemistry between Paul and Epaphras. But if you are an evangelist and you’ve never discovered these insights, you’ve got a problem — and that’s the problem with some evangelists (and some pastors and some teachers).