Breaking from a situation that we are used to being in, but don’t particularly like being in is not always easy. In order for that to happen, people need not only to want a different outcome, but also feel that it is safe for them to implement the change they need to achieve that outcome.

A sport that I really enjoy is cycling. It provides the opportunity to get out of the house, get my body moving and to ride through a diverse range of areas in the Tamar Valley and beyond. These areas include  dedicated cycling tracks as well as the many shared tracks that are available along the edges of the Tamar and North Esk Rivers in Launceston. Riding on these tracks is pleasant and scenic and keeps riders clear of road traffic. However, the nature of the tracks does expose a rider to all manner of pedestrian traffic. In order to ride responsibly, a rider’s speed has to be slow.  One must always remain alert for the unexpected things that can happen on a shared track and be ready to take evasive action. As much as I enjoy a slow ride and a coffee on a sunny afternoon, I have always wanted to ride on these tracks at speed. For this to happen, something had to change. By implementing one small change, I have been able to safely achieve an outcome that I have been wanting for a while.

What was changed was my choice of riding time. After dark, the dedicated and shared riding

tracks are virtually clear of people, dogs and prams. All it took was fitting of a 300 lumen head light and a tail light to my bike. Now I can experience a faster, safe and exhilarating night ride. Because I changed they way I approached the situation, I was able to achieve the outcome I desired. The light shows me what is ahead and it has transformed my Launceston riding experience.

What is interesting about this riding transition was that riding at night was not my idea. Someone I ride with who was more frustrated with having to share than I was made the suggestion.

I had just accepted that these tracks were for a slow and leisurely ride and that I could go faster on mountain biking trails when I needed to. We can often benefit from the suggestions of others when we are stuck in a particular way of doing things and can’t see a way out of the ‘same old same old’ way of doing sport or life.

Hezekiah, one of the kings of Judah (729-687 BC) provides us with an example of the benefits that can be realised when a person becomes aware of a possibility that has the potential to break them from the ‘same old same old’ way of doing life. Hezekiah was the son of King Ahaz. He become king at the age of 25 and reigned for 29 years. Hezekiah was born into a kingdom that had turned its back on God under the rule of his father, King Ahaz.

Ahaz was twenty years old when he began to reign, and he reigned sixteen years in Jerusalem. And he did not do what was right in the eyes of the Lord his God, as his father David had done, but he walked in the way of the kings of Israel. He even burned his son as an offering, according to the despicable practices of the nations whom the Lord drove out before the people of Israel.
Second Kings 16:2

WHAT ONE THING DID HEZEKIAH CHANGE?

Hezekiah made the following change:

He trusted in the Lord, the God of Israel, so that there was none like him among all the kings of Judah after him, nor among those who were before him.
2 Kings 18:5

The result of this one change is described in the two proceeding verses:

And he did what was right in the eyes of the Lord, according to all that David his father had done. He removed the high places and broke the pillars and cut down the Asherah. And he broke in pieces the bronze serpent that Moses had made, for until those days the people of Israel had made offerings to it (it was called Nehushtan).
2 Kings 18:3-4

These actions resulted from Hezekiah’s decision to break from the established culture of kingship and the pattern of idolatry that been set by his father and other kings of Judah.

GOD IS SAFER THAN A SIMULATOR

Breaking from past practice is not always easy. In order for that to happen, people need to want a different outcome and feel it is safe for them to implement the change they need to achieve it. In the shipping 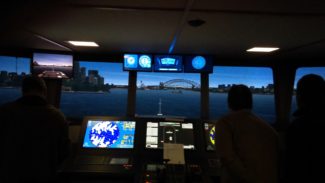 industry I am involved in the provision of Bridge Resource Management (BRM) Training for navigating officers. A large component of this training  makes use of marine simulation which allow trainees to implement a change to the way they interact with each other as well as the automation and technology found on the bridge of a modern ship. In this environment, the effect of making a change can be experienced in a safe environment. If the ship runs aground the exercise is debriefed for lessons learned and then reset ready for another run. However, that is not always the case in real life. Sometimes fear of change can hinder us. We often don’t want to change even one aspect of how we do life because we are comfortable with what we know and are familiar with – even though we want our circumstances to be better. We may also be worried about what others might think.

Pastoral Counseling. An Effective Short-Term Approach for Getting People Back on Track. Charles Kollar encourages us to firstly imagine what or our life might look like if we had escaped the ‘same old same old’ we are currently trapped in. He then suggests we identify one thing that had changed in to achieve this this more positive future. Once a change is identified, we are encouraged to have a go at implementing it. If it makes a positive difference, the next step is to consolidate the change and then look for another.

The one change that we know works is doing what Hezekiah chose to do. Hezekiah made a change. He decided to trust in in God.  This decision led to a reshaping of the people he ruled over so that many turned away from idolatry. When we make a decision to trust in God we may not feel safe (as informed by the world), but we are in a safe place. We are in the hands of our loving Creator. This is captured beautifully be the writer of Psalm 91.

He who dwells in the shelter of the Most High
will abide in the shadow of the Almighty.
I will say to the LORD, “My refuge and my fortress,
my God, in whom I trust.”
Psalm 91:1-2

THE ONE CHANGE CHALLENGE

Trusting in God means we trust His Word. We are blessed because it is available to us. If we are looking for ways to change and move out from where we might be stuck and languishing, we can find them in the Bible. If anyone is looking for a challenge, pick one of the following recommendations and try it out. I’m confident that it won’t make things worse.

Let love be genuine. Abhor what is evil; hold fast to what is good. Love one another with brotherly affection. Outdo one another in showing honour. Do not be slothful in zeal, be fervent in spirit, serve the Lord. Rejoice in hope, be patient in tribulation, be constant in prayer. Contribute to the needs of the saints and seek to show hospitality.
Romans 12:9-13

So let’s make one change that might result in our present circumstance improving. Instead of making use of a simulator or a new cycling headlight to cut through the darkness, let’s seek the illumination that comes from the Holy Spirit. When we place our trust on God and in the light that is His Word, it will penetrate the darkness and show us the safest way forward. This will allow us to move ahead and to grow in Christ. This one change will bring great benefits. Are you up for a challenge?