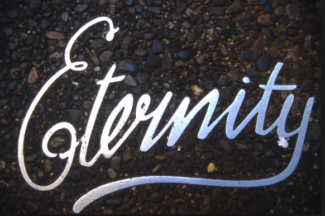 The word eternity is one that can evoke a number of responses. To some people it has no significance. This is based on their belief that for them, life will eventually come to an end and that will be it. For others, such as myself, the word eternity evokes a sense of anticipation and joy at what is to come after we eventually die. 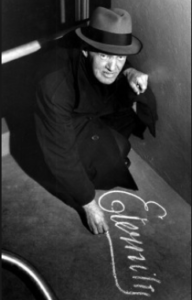 And just as it is appointed for man to die once, and after that comes judgment, so Christ, having been offered once to bear the sins of many, will appear a second time, not to deal with sin but to save those who are eagerly waiting for him.
Hebrews 9:27-28 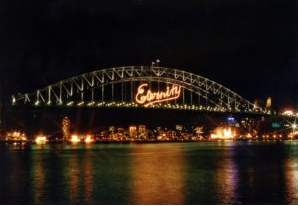 The importance of the concept of eternity was something that a World War 1 Veteran, Arthur Stace took seriously. In the period 1932-1967 Arthur roamed around Sydney writing the word eternity with chalk on footpaths in the hope that on seeing the word, people might think on the notion of eternity and the implications that are associated with it.  Arthur’s work was honoured during the 1999 New Year celebrations when the word eternity was lit up across the Sydney Harbour Bridge and during the opening ceremony of the Sydney 2000 Olympic Games.

In last week’s message from the Pastor’s Desk we explored the role of Jesus as a high priest. Jesus as appointed by God the Father on the basis of His perfection and because He lives forever (Hebrews 7:24).

Chapter 17 of the Gospel of John contains a record of Jesus praying to God the Father that is beautiful in its intimacy. This prayer also reveals the heart of Jesus for His disciples as well for every person who is yet to know Him. This prayer is made just before Jesus is arrested by the Temple guards in the Garden of Gethsemane. Jesus is anticipating the culmination of God’s plan for redemption for humankind when He says “Father, the hour has come; glorify your Son that the Son may glorify you… (John 17:1). This redemptive plan began in the Garden or Eden and is about to begin its conclusion in the garden of Gethsemane with Jesus’ arrest. This conclusion has eternal implications for us all. We begin to see this as Jesus refers to eternity in His prayer.

Although you and I are not eternal beings, we are immortal beings, who, unlike God, have a beginning. However,  we are spiritual beings that will continue to exist after our earthly body has perished. As a result, we have the opportunity to spend eternity in God’s presence, as the Apostle John reminds us.

And I heard a loud voice from the throne saying, “Behold, the dwelling place of God is with man. He will dwell with them, and they will be His people, and God himself will be with them as their God. He will wipe away every tear from their eyes, and death shall be no more, neither shall there be mourning, nor crying, nor pain anymore, for the former things have passed away.”
Revelation 21:3-4

Access to this eternal life with God requires only that we know the only true God and Jesus Christ who He sent. As we continue to read through Jesus’ priestly prayer we are provided with an insight into the priestly role that Jesus has taken upon Himself in order to spare as many people as possible for spending eternity in Hell.  Jesus has manifested God’s name to the people (17:6). He has also communicated God’s message of salvation to the world in a priestly effort to bring people closer to God.

For I have given them the words that you gave me, and they have received them and have come to know in truth that I came from you; and they have believed that you sent me.
Hebrews 17:8

Jesus makes it very clear that He is the way to eternal life. This is it. There is no other way, despite what we may believe to be the case. We will not achieve eternal life through lifestyle choices or wealth, science, eastern religions, space aliens, humanism or any spiritual belief that denies Jesus Christ is the risen Son of God who willingly sacrificed His life as payment for our sins.

For God so loved the world, that he gave his only Son, that whoever believes in him should not perish but have eternal life. For God did not send his Son into the world to condemn the world, but in order that the world might be saved through him. Whoever believes in him is not condemned, but whoever does not believe is condemned already, because he has not believed in the name of the only Son of God.
John 3:16-18

In this prayer, Jesus intercedes for us. He petitions His Father to keep those who follow Him in His name. He does this because He has experienced the hate that the world can show towards Jesus and His followers (Hebrew 17:14). As a priest, He empathises with the struggles that Christians will encounter, endure and overcome. Endurance and overcoming are critical for the spread of the Gospel.

Jesus is not just praying for his disciples. He is also praying for those who will believe in Him because of their testimony. (John 17:20). As Christians, we are in the world to be ambassadors for Christ; unified in purpose and growing more Christlike  as we mature as Christians. This is so that the world may know that God sent Jesus and that He loves each of us as much as He loves His Son.

The heart of Jesus for each of us is revealed beautifully towards the end of His prayer when He prays,

Father, I desire that they also, whom you have given me, may be with me where I am, to see my glory that you have given me because you loved me   before the foundation of the world.
Hebrews 17:24

Jesus longs for us to be with Him in Heaven. He is not some distant and aloof deity that set the universe in motion and is uncaring about who each of us are, what our struggles are and of our need for rescuing from a world that is infected with sin and the outworking of sinful actions.

Eternity is forever. It has no end. Let’s remember the importance of this notion for not just ourselves, but for those who are headed for an eternity that is terrible in the utmost. Can we be as motivated as Arthur Stace was? Can we reflect the love and concern that Jesus shows in John 17 to others?