Then the king commanded Ashpenaz, his chief eunuch, to bring some of the people of Israel, both of the royal family and of the nobility, youths without blemish, of good appearance and skillful in all wisdom, endowed with knowledge, understanding learning, and competent to stand in the king’s palace, and to teach them the literature and language of the Chaldeans. Among these were Daniel, Hananiah, Mishael, and Azariah of the tribe of Judah.
Daniel 1:3-4, 6 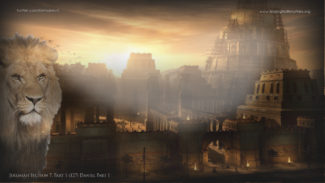 Daniel’s world changed the day the invading King of Babylon forcibly entered Jerusalem. Taken from his family, his familiar surroundings, a language he grew up with, he was confronted with the land of his conquerors where they spoke a foreign language, held radically different views about what it means to be human, an utterly condescending view of his religion, and a diet of food he was forbidden to eat. All the while, he was offered previously unimaginable privileges if he would just compromise on some of his convictions.

¶ But Daniel resolved that he would not defile himself with the king’s food, or with the wine that he drank. Therefore he asked the chief of the eunuchs to allow him not to defile himself.
Daniel 1:8

Daniel’s people were no longer in charge. The culture he was immersed into hated what he believed and stood for. Yet Daniel resolved not to compromise or back down on what he believed or the convictions he held. Not much older than the young Daniel was the prophet Jeremiah who had written to Daniel and his fellow exiles:

¶ These are the words of the letter that Jeremiah the prophet sent from Jerusalem to the surviving elders of the exiles, and to the priests, the prophets, and all the people, whom Nebuchadnezzar had taken into exile from Jerusalem to Babylon…But seek the welfare of the city where I have sent you into exile, and pray to the LORD on its behalf, for in its welfare you will find your welfare.
Jeremiah 29:1, 7

Daniel resolved to do just that. Despite how abominable he found the Babylonians and their ways, he would be a blessing to them without compromising his convictions! 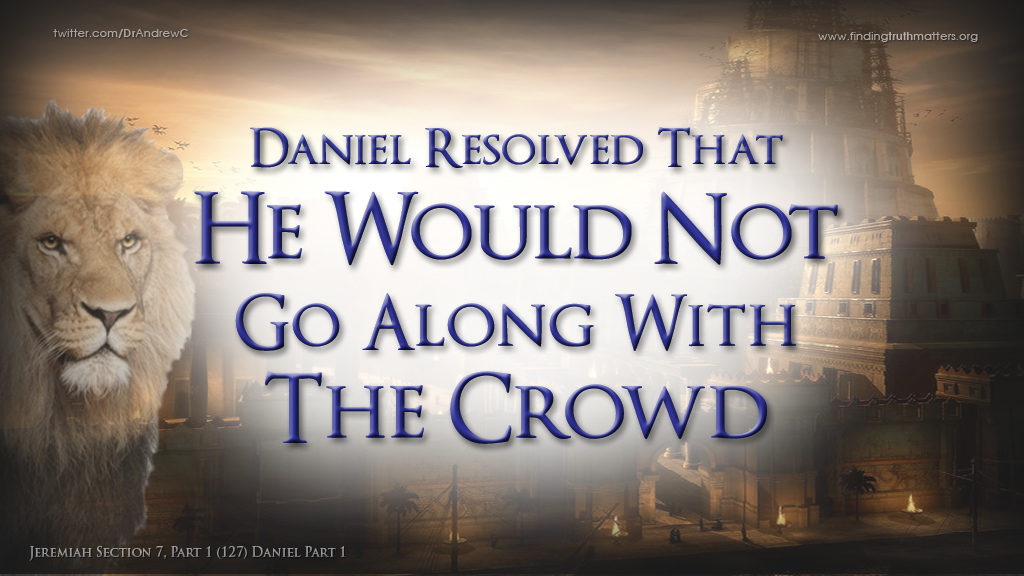 Daniel was away from his parents’ supervision. He no longer had the priests of the temple or the elders of his people holding him to account – yet, he chose to seek God. He chose to pray. He chose to the Scriptures, especially the prophecies of Jeremiah. In short, he deepened his relationship with God. He learned how to hear God and perceive his voice in dreams and visions.

Then the mystery was revealed to Daniel in a vision of the night. Then Daniel blessed the God of heaven.
Daniel 2:19

He didn’t, and couldn’t, do this in isolation from other believers. He knew that time spent in worship with God’s people was essential to his own spiritual health – no matter how few they were in number.

¶ Then Daniel went to his house and made the matter known to Hananiah, Mishael, and Azariah, his companions, and told them to seek mercy from the God of heaven concerning this mystery, so that Daniel and his companions might not be destroyed with the rest of the wise men of Babylon.
Daniel 2:17-18 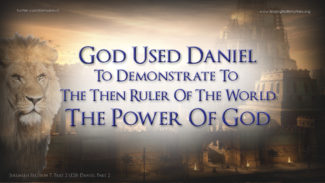 ¶ Then King Nebuchadnezzar fell upon his face and paid homage to Daniel, and commanded that an offering and incense be offered up to him. The king answered and said to Daniel, “Truly, your God is God of gods and Lord of kings, and a revealer of mysteries, for you have been able to reveal this mystery.”
Daniel 2:46-47

Daniel was prepared to consistently live out his faith in the God of the Bible without the need for others to agree with him. The result for Daniel was the widespread respect and admiration by the Babylonians for his proven character. 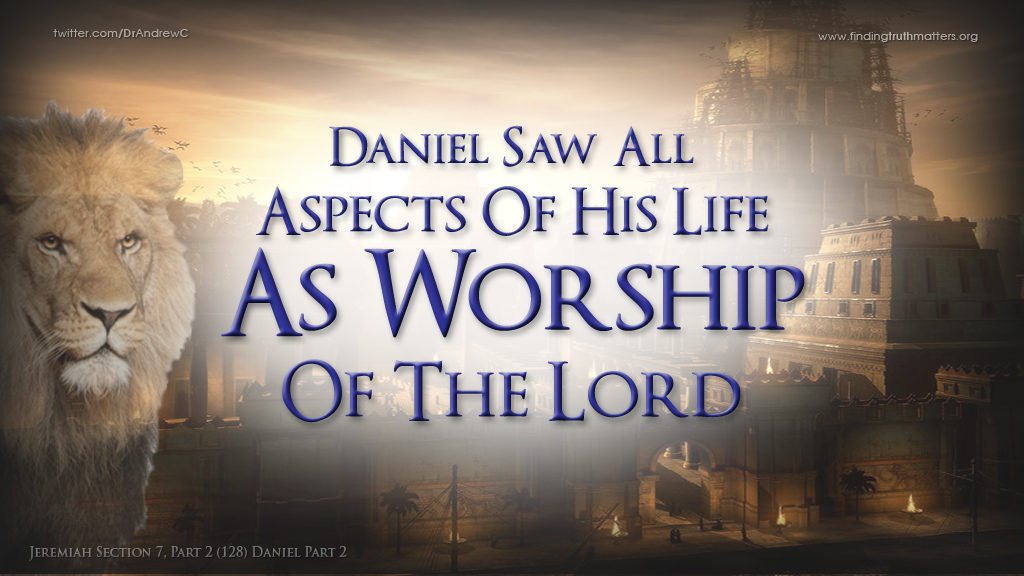 Do you see a man skillful in his work?
He will stand before kings;
he will not stand before obscure men.
Proverbs 22:29

Daniel proved himself to be a man who could carry responsibility. He sought to live in obedience to the word of the Lord through Jeremiah and to be a blessing to the people and land to where he had been sent (Jeremiah 27).

¶ Then Belshazzar gave the command, and Daniel was clothed with purple, a chain of gold was put around his neck, and a proclamation was made about him, that he should be the third ruler in the kingdom.
Daniel 5:29

With the enormous responsibility that Daniel received, he continued to maintain his devotion to the Lord. His religious commitment in no way diminished his ability to serve in the government of Babylon.

Then this Daniel became distinguished above all the other high officials and satraps, because an excellent spirit was in him. And the king planned to set him over the whole kingdom. Then the high officials and the satraps sought to find a ground for complaint against Daniel with regard to the kingdom, but they could find no ground for complaint or any fault, because he was faithful, and no error or fault was found in him.
Daniel 6:3-4

As Daniel aged and weathered life’s storms, his heart enlarged for people and their situations. He could be forgiven for growing increasingly bitter about all the negative aspects he had been through (exile, friends thrown into a fiery furnace, threatened with death by the king, cast into a den of lions, the overthrow of the kingdom and his position in it). Instead, as Daniel continued to grow in his relationship with God he became increasingly aware of the plight of others. Not only did Daniel become sensitive to those in distant lands, he also became concerned for the plight of people – for generations to come!

The vision of the evenings and the mornings that has been told is true, but seal up the vision, for it refers to many days from now.” ¶ And I, Daniel, was overcome and lay sick for some days. Then I rose and went about the king’s business, but I was appalled by the vision and did not understand it.
Daniel 8:26-27

Daniel’s view of his life was enlarged over time from concerns about his own life and friends, to concerns about people he did not know or had ever met. He even became concerned for people yet to be born. His vision of the future went from thinking a few years ahead to thinking about the next few hundred years ahead! This concern for people beyond a person’s own postcode and era is the common experience of those who walk a long time with Christ.

in the first year of his reign, I, Daniel, perceived in the books the number of years that, according to the word of the LORD to Jeremiah the prophet, must pass before the end of the desolations of Jerusalem, namely, seventy years. ¶ Then I turned my face to the Lord God, seeking him by prayer and pleas for mercy with fasting and sackcloth and ashes.
Daniel 9:2-3

Near the end of Daniel’s life he received increasing revelations about the coming Messiah and the end of the Old Covenant and its elements (the temple, the priesthood, and the sacrifices – Dan. 9:27).

¶ “At that time shall arise Michael, the great prince who has charge of your people. And there shall be a time of trouble, such as never has been since there was a nation till that time. But at that time your people shall be delivered, everyone whose name shall be found written in the book. He said, “Go your way, Daniel, for the words are shut up and sealed until the time of the end.
Daniel 12:1, 9 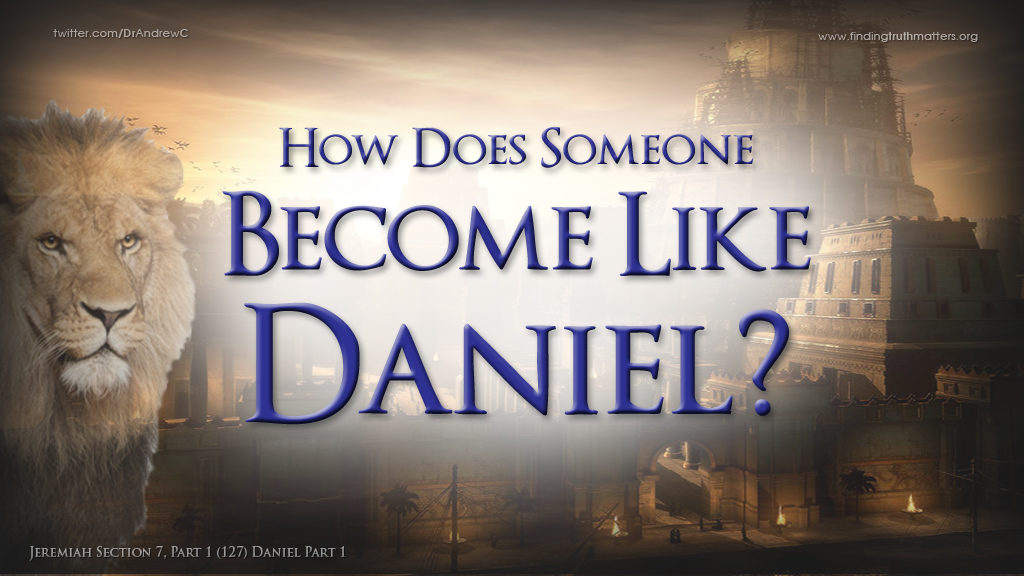 DANIEL’S LESSONS FOR FOLLOWERS OF CHRIST

I find the lessons from Daniel’s life to be both inspiring and relevant for where our culture is at now. It is my hope that this brief overview will encourage you to consider more of the lessons to be gleaned and applied from the Statesman-Prophet Daniel’s life. If you receive this encouragement, I suspect that you will at least conclude that Daniel should inspire us to: