I love technology. Sort of. But I don’t love everything it has done to us. Far from always making our lives better, the evidence seems to show that it has in many instances made us lazy. Its negative physical effects are well known, even its intellectual effects have been noted (largely by those who have cause to criticise bloggers for their unsubstantiated claims). But what is not talked about as much is its increasingly negative spiritual effect. This should specifically concern Christ followers.

THE HEART OF CHRISTIANITY

Followers of Christ worship the God of Truth.

Jesus said to him, “I am the way, and the truth, and the life. No one comes to the Father except through me.
John 14:6

The God of Christianity declared Himself to be the embodiment of truth (John 14:6). When accused of claiming to be The Son of God (Prov. 30:4; Matt. 26:63; John 19:7) and thereby co-equal with The Father God, He stood before Pontius Pilate as the Truth.

Pilate said to him, “What is truth?” ¶ After he had said this, he went back outside to the Jews and told them, “I find no guilt in him.”
John 18:38

When Jesus was charged with wrong-doing, He challenged His accusers to find Him guilty of any sin, which they could not do.

Which one of you convicts me of sin? If I tell the truth, why do you not believe me?
John 8:46

Thus, the heart of Christianity – its centre-piece – is Jesus Christ and His identity (the eternal, divinely co-equal Son of God), His nature (born as a human without sin and lived without ever sinning), and His atoning/redeeming work through the Cross and His resurrection. This centre-piece of Christianity is without negotiation. No Christ: no Christianity!

THERE IS NO OTHER JESUS

Despite the Bible being so clear about the place of this, and only this, understanding of who Jesus is, to Christianity, there are some Church leaders who are now teaching another Jesus than the One presented in the Bible. Rather than Christ being the eternally begotten (uncreated, yet always been the) Son of God, who was conceived in a virgin, lived a sinless life, died an atoning death, and rose from the dead three days later, they teach that Christ was born a sinful human, who sinned just like us, and was eventually put to death. For example, “Dr. Karen Oliveto, the first openly lesbian bishop in the United Methodist Church, recently offered this message to her flock:

“Too many folks want to box Jesus in,” she wrote, “carve him in stone, create an idol out of him. [But] the wonderful counselor, mighty God, everlasting one, prince of peace, was as human as you and me. Like you and me, he didn’t have his life figured out.” Jesus had “bigotries and prejudices,” she added, even sins which He had to learn to overcome.
BreakPoint 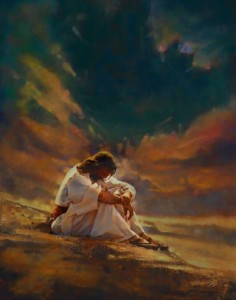 This is an appalling distortion of who Christ is. As disgraceful as this is, it is becoming an increasingly popular view. One confused talk-back caller called into an apologist to ask, “Did Jesus ever sin?” He went on to say that his daughter told him that  while he was in ‘big’ church, and she was in Sunday School, she was taught that since Jesus had contact with the dead (when raised several of them from the dead) He had ‘broken the Law of Moses’ and thereby, “sinned”. The caller’s daughter was quite confused by this and questioned her father about it. She went on to tell her father that the Sunday School teacher told her that Jesus was right to sin because He loved people more than He loved the Law of God.

This girl, and her father, had every right to be confused. Jesus did not break any law of Moses let alone sin! And He certainly did not regard it justified to break the Law of God if He thought it was ‘unloving’. In fact, it was Jesus who prescribed every law in the Law of Moses!

I can understand someone in Dr. Oliveto’s position needing Jesus to be a ‘sinner’ who was blighted by ‘bigotries and prejudices‘. But Jesus does not bend to our sinful proclivities. He will not be shaped into our image. A Jesus who says ‘sin is OK’, or had ‘prejudices’ is a Jesus different from the One who walked the shores of Galilee, or the One who was nailed to the Cross of Atonement! This makes Pope Francis’s statement about Jesus needing to “beg forgiveness from his parents” just as bewildering!

Even in the days of the Apostle Paul, there were people misrepresenting Jesus.

And the Apostle’s response to those who were distorting who Jesus was, was to re-assert the truth about Jesus. (He particularly did so in his epistle to the Colossians.) If we would like to avoid the eternally perilous misrepresenting of Jesus, we would be well advised to learn from the Bereans, who are referred to Acts 17, who listened to the Apostle Paul then sought the Scriptures to see if what he said was true. If this same practice was applied to Dr. Oliveto’s statement about Jesus, or that Sunday School teacher, or even Pope Francis’s statement about Jesus, we would be prevented from believing lies about Jesus and in the process come to discover that the truth about Jesus is more beautiful than most realise.