What More People Could Do With More of

WHAT MORE PEOPLE COULD DO WITH MORE OF! 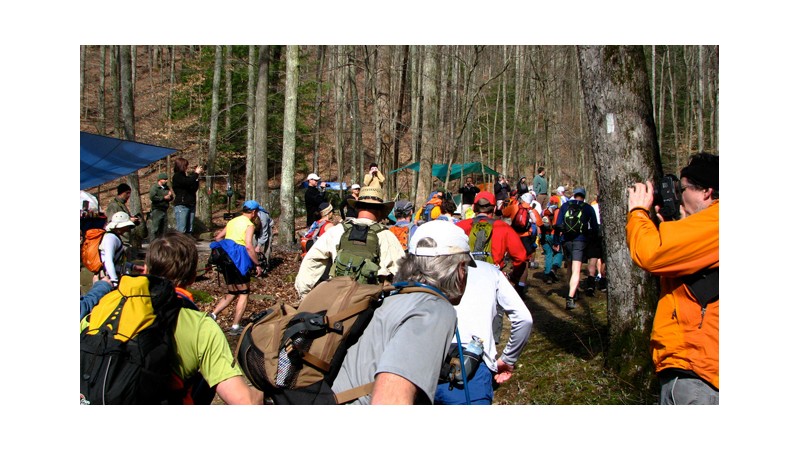 Kim and I watched a horror movie last night called, The Barkley Marathon. I might be the only one who considers this documentary about a race through Tennessee’s Frozen Head State Park a “horror” movie. But consider things from my point of view: Only 40 contestants each year are accepted into this 200km foot race, which includes 5 laps of a National Park with each lap being different. It involves ascending and descending over mountainous terrain. All the while, each contestant is wearing a backpack – as each lap takes between 10 to 15 hours to complete. Runners stop between laps for just a few minutes for napping and calorie refuelling. To put things in perspective, this race is the equivalent of running the Overland Track from Dove Lake to Lake St. Clair and then running back again, and then turning around at Dove Lake and running to Mount Ossa (with the allowance for the fact that Mt. Ossa is only one third of the ascent of Frozen Head State Park)! Only 14 people have ever completed the Barkley Marathon! And as we were watching this horror movie, one of the contestants said something truly stunning to the Documentary maker! 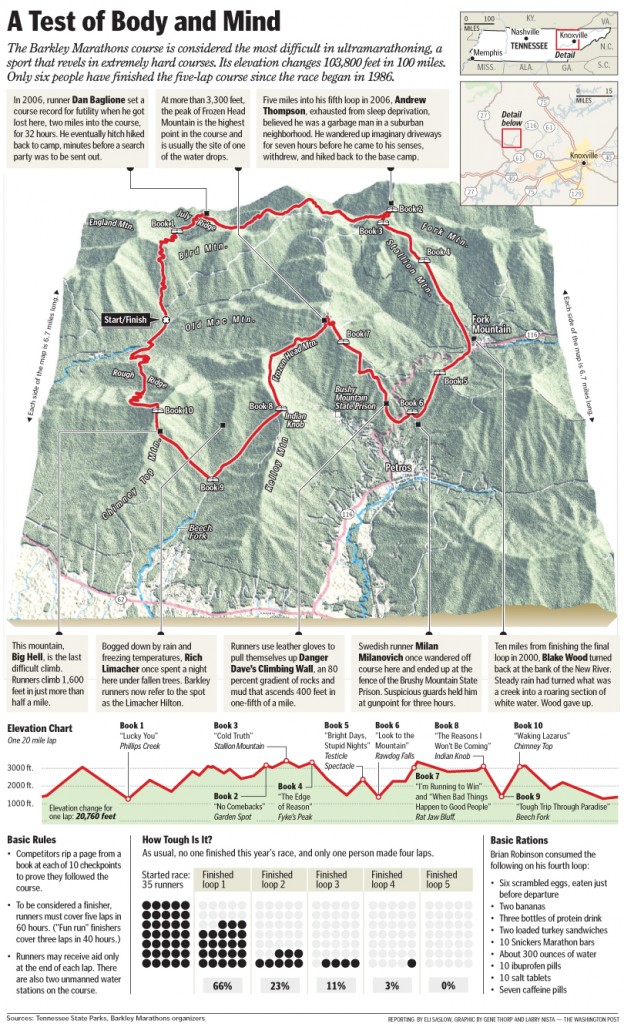 As I watched these contestants jogging up mountains, through forests, along creeks, via drains, and heard them talk about the discomfort (and eventual agony) they have to deal with, I recalled each of my 5-day-plus hikes and the gruelling pain I experienced doing each of them. But then the horror of these contestants’ feats grew as I realised these people were doing the equivalent 18 days of normal-person mountainous-bush-walking in under two and half days! As the contestants progress through the race, they battle cuts, abrasions, bruises, exhaustion, and the breaking of their wills. Curiously, most of the people who compete in this race, and even more curiously, the only people who ever completed the race are those with advanced Graduate College Degrees (Engineers, Chemists, Physicists and the like). I wasn’t surprised to hear this, and probably neither would anyone with a higher degree. The little known reason for this is that higher degrees aren’t so much about intelligence as they are about endurance. 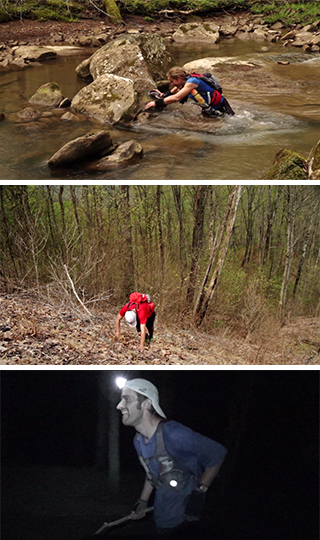 The Documentary gave opportunity for those surviving contestants to share their stories. This was when I was a little stunned by what one of them said. He shared the story of how his father had worked hard all his life and saved for his retirement which was to commence with the trip of a life-time. But then, one year before his father was to embark, he suddenly died. This caused his son to reassess his own priorities. He had previously been a keen jogger. One of his jogging buddies mentioned that he had just run his first marathon. He wondered if he was capable of running a marathon. He gave it a go. After completing several marathons, then ultra-marathons, he heard about the Barkley Marathon (considered one of the world’s most difficult ultra-marathons). As he shared his story, it turned out that the loss of his father was not the only pain he had experienced. He had become accustomed to pain – not just the physical affliction type. Somehow, this gave him the mental strength to be able to endure these gruelling running races. As he was talking, the documentary showed him during this Barkley Marathon – cut up, blistered, dehydrated, running in the dark with a small head-lamp, as he trudged up a hill covered in briars. Then he said it.

“Most people could do with more pain in their lives – seriously!”

He went onto say, “Most people don’t know what they’re capable of. Only pain can reveal it to them!” By testing himself with these ultra-marathons, even with all the pain that they caused, he was discovering who he really was and what he was really made of. To get through the pain he had to endure. By enduring, he was becoming a stronger person.

When I heard him say this, I was initially stunned. I didn’t like hearing it. But he said it in such a thoughtful, matter-of-fact way, that it then made me ponder on it the next day. You see, the past year I have lived with pain. Spinal degeneration and a touch of Trigeminal Neuralgia will do that. Everything I have to do now happens a little slower. I have had to learn to endure. Toward the end, completing the F.W. Boreham Documentary became not so much about documentary film-making as it did endurance. I have now completed 7 out of 10 Biblical Greek exams. I’m a year overdue from completing it. When I do, it will not be a measure of my commitment to Biblical scholarship, as much as it will be about endurance. Preaching through the Book of Jeremiah over the past six or so years has not been easy. It has required doggêd endurance. I can’t run, let alone do an ultra-marathon, and you might share my confession, but we all have to endure something in order to become who we are meant to be.

In the TV sci-fi series, Heroes, Claire does not feel pain. Initially, she thinks this is a wonderful gift. But then she grows to despise it. She no longer feels human. To be human is to experience pain.

For we know that the whole creation has been groaning together in the pains of childbirth until now. And not only the creation, but we ourselves, who have the firstfruits of the Spirit, groan inwardly as we wait eagerly for adoption as sons, the redemption of our bodies.
Romans 8:22-23

No temptation has overtaken you that is not common to man. God is faithful, and he will not let you be tempted beyond your ability, but with the temptation he will also provide the way of escape, that you may be able to endure it.
First Corinthians 10:13 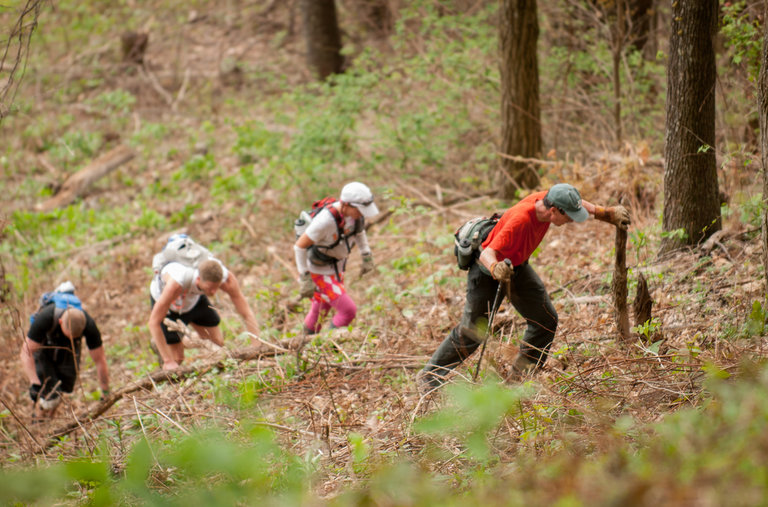 As I think about how we can win our community to Christ and see Christ’s church in Legana grow with the fruit of this quest, I know that this greatest of all quests will require extraordinary endurance. Together, we must endure in prayer, endure in our witness, endure in our observance of the Sunday-Sabbath, endure in our private devotions of Bible reading and prayerful reflection, endure in our sacrificial giving, endure in our prophetic stand for righteousness. And if this formula for achieving great things is correct, we will have to endure through adversity, discomfort and pain. The winner of the Barkley Marathon wins nothing other than the glory, but compared to the cost of our marathon to win lost souls from our community to Christ, the Barkley Marathon is a walk in the park in comparison!