ALL IN ALL, A THEOLOGY FOR SCHOOL TEACHERS 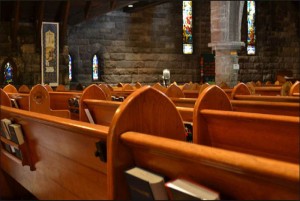 When it comes to things that concern God we might think that all He really only cares about our religious devotion like church attendance, Bible reading and prayer-times. We rarely think that God is interested in such earthy and tedious things like cooking, travelling, shopping, our mundane work, or even school-work. After all, what interest would God have in such things as algebra, cartesian graphs, geometry, integers, wood-work, biology, chemistry, statistics, probability, recipes, grammar, history or geography? Well, as it turns out, each of these very secular matters are vitally important to God because each of them reveals an aspect of His character and a window into His glory! Although it has largely been forgotten by the Academy, it is why Theology was long considered the “Queen of the Sciences”.

Physicists like Professor Paul Davies, who is not a believer, have long marvelled at the universe in which we live because it is highly and precisely mathematically ordered. Philosophers take this pondering one step further and wonder why is it that we live in a universe where mathematics actually works at all? These philosophers are quick to point out that we also live in a world where we take for granted the reality of numbers. But would numbers exist if there was nothing to count? The answer to this philosophical question regarding the foundation of mathematics reveals an amazing truth about God including- not every reality is material. Mathematics works because there is a God who has ordered the universe He has created. And like mathematics, He has made the universe to be understandable.

¶ Thus says the LORD, who gives the sun for light by day and the fixed order of the moon and the stars for light by night, who stirs up the sea so that its waves roar—the LORD of hosts is his name:
Jeremiah 31:35

“Do I not fill heaven and earth?” (Jer. 23:34). There is no part of this universe that God does not fill. This includes the material (made of molecules) and the conceptual (such as morality, numbers, memories, emotions) aspects of the universe. Every bit of this universe is God’s!  Every academic subject that can be studied was authored by God and is available to us so that we can explore His glory! Jesus Christ is not just a great Saviour, He’s a great Mathematician.

Mathematics is made up of immaterial concepts such as numbers, but even these immaterial concepts can be thought of in other even more highly symbolic concepts: letters (x+5=9, x must therefore be 4). Thus, every time someone does an algebraic equation they are validating the Biblical revelation that: (i) the universe is comprised of both material and immaterial realities, (ii) mankind is uniquely created in the image of a God who communicates in symbols (words, numbers, text, objects) and He has created mankind in His image as the only species who shares this trait, (iii) the universe is largely comprised of objective realities (objectively, 2 + 2 = 4, this is not subject to opinion, preference, or change). 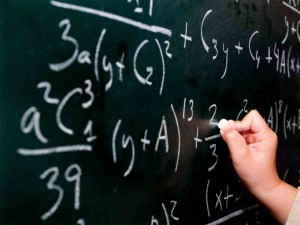 Thus, to study mathematics is to delve into an aspect of the mind and heart of God. Consider that we use mathematics to (generally) solve problems. Mathematics reveals a grand Theological truth about God: He has designed a Universe where redemption is possible. Not only is redemption (solving a problem) possible in this world, the Saviour of all mankind has solved the greatest problem in the universe – a problem so great, mankind was unable to solve it by ourselves. Jesus Christ not resolved the problem of mankind’s universal arrogance, guilt and shame caused by sin (which not only blinds and deceives all people to see our true condition) it eternally separates us from God, He also redeemed mankind to become sons and daughters of God by adoption, if they will turn to Him. Every time you do a math’ problem, you should remember this.

God uses human language to convey eternal truth. Our ability to decipher, translate, and interpret symbols into rational ideas and messages culminates in the written language. God has ordained that eternal destiny of every human soul depends upon this ability. He has enabled mankind to develop meaningful language and convey that language in a precise written form. If we have the privilege of being taught how to read, we are so graced by God that we might explore His glory in His Word, His ways and His will. This is why the elements of language really matter – because they Sovereignly ordained by God as a primary means for communicating with mankind. The elements of written language include vocabulary and grammar. 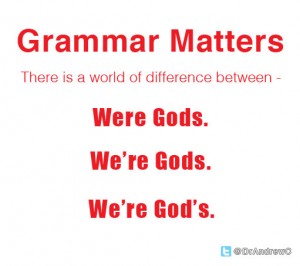 The wonder of God’s Word is that it can be translated into any language and still be irreducibly the divinely-inspired, inerrant, Word of God. But it is also why translators go to great pains to ensure that they translate the sacred text with grammatical precision. Thus, when we study English (in our instance) and gain an appreciation for vocabulary precision (being able to use the right word for the right occasion) and grammatical nuances (such as when and where to use a comma or an apostrophe), we are opening up our minds, and therefore our hearts, to be able to develop a greater understanding of who God is and the wonders of His ineffable glory. God indeed fills every part of the universe – including the English teacher’s whiteboard! He has ordained that mankind can read and write in order that people might be saved from eternal damnation and brought into the freedom that can only come from knowing Him. God has chosen to reveal Himself as The Word by The Word.

And count the patience of our Lord as salvation, just as our beloved brother Paul also wrote to you according to the wisdom given him, as he does in all his letters when he speaks in them of these matters. There are some things in them that are hard to understand, which the ignorant and unstable twist to their own destruction, as they do the other Scriptures.
Second Peter 3:15-16 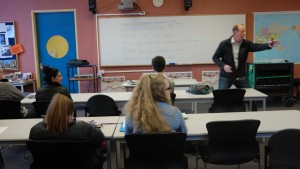 The prophets foretold of a time when God’s glory would cover the earth as the waters cover the seas (Hab. 2:14). In that day, everything shall be seen as revealing the glory of God (Zech. 14:20-21). Even mundane pots and pans will declare, “Holy to the Lord”, they declared.  If you are a school teacher, you are fulfilling a very high calling in the eyes of God. You are not merely “baby-sitting”, or, “child-minding”, or “keeping kids off the streets” – you are cultivating young hearts and minds to encounter the glory of God!

When I am teaching kids to play tennis, I introduce them to basic skills, stroke technique, scoring, and rules of the game. After they understand these seemingly mundane things I will often point out the parallels between playing tennis and successfully living life (the need for rules, the blessing of boundaries, the value of competition, and so on). When I watch a movie I often see a worldview dependent on God’s existence for it to make any sense – truth, justice, fairness, love, sacrifice for others – only make sense in a world created and ruled by God. Every subject a teacher must teach is only teachable because it is made possible by God and therefore reveals an aspect of His glory. Otherwise teachers would not be able to implement First Corinthians 10:31!

Yes, God most certainly does fill heaven and earth!